Where ARE The Liberals? #Brexit #EUReferendum 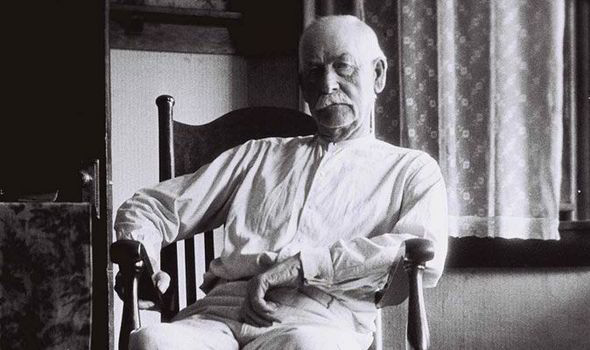 ..hiding under a stone with the Schumachians? Was it seriously beyond the wit of man or woman to point out the environmental consequences of our exit from The European Union, the decades of work put in by our MEPs on our behalf or the ongoing campaigns and issues which have penetrated so deeply into our body politic? The younger generation aren't stupid but without being given sensible direction and advice from ours they are as easily lead as we! The trouble Mr.Corbyn with your much vaunted (and laudable), opposition to "Austerity" (and your closet "dislike of a Yiddish nature"), is that you lead a party full of people who (like yourself), are more interested in getting in to power than they are the methodology by which this may be achieved. The utterly poisonous relationship between the Labour Party and The Crown over The Scottish Problem should prompt them to slide under a stone themselves at this time but it hasn't, there is an arrogance born of self-righteousness that is just as toxic as that born of greed (often recognised by the greedy and then manipulated for their own purposes), that is exemplified by Mr.Corbyn's compromised republican stance.
Surely our Green Party have also fallen down in their responsibility to properly brief the electorate? It is far from difficult to fully and clearly state the case that The European Union and Britain's membership of it are vital to the co-ordination and furtherance of all the international agreements and actions designed to protect the global environment for future generations. I've dealt with the issues of Nato-isation and American influence in many of my other posts suffice to say here that it doesn't take a genius to Marshall ones forces in this regard either (now that is a can of worms, as a bit of fun try searching "Marshall Plan" E.R.P* "The European Recovery Program" -esp. socio/political analysis of-, and watch what squirts out "in all directions", funny how the motor industries of both Germany and Japan appear to be bent -coincidence perhaps are they all that bad now?-).

*http://www.express.co.uk/news/world/417490/The-Wild-West-wide-boy-Wyatt-Earp-was-the-hero-of-the-Gunfight-at-OK-Corral
Posted by Gerard at 10:42