"Tea in the Sahara?" 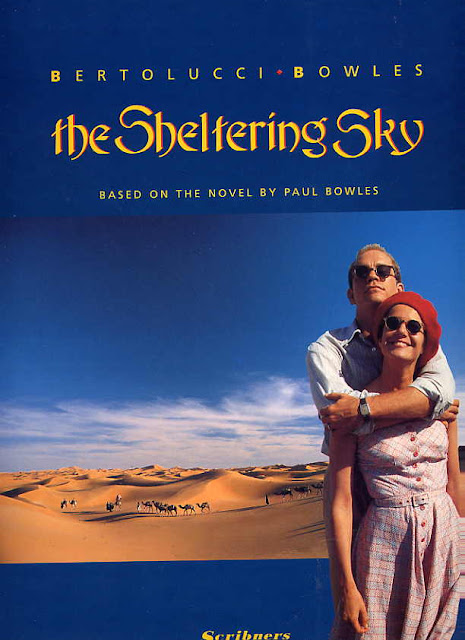 Quote; ""Better known as a composer* than a writer, he has not allowed his passion for either form of expression to interfere with his growth into completeness of personality. Now this book has come at the meridian of the man and artist. And, to me very thrillingly, it brings the reader into sudden, startling communion with a talent of true maturity and sophistication of a sort that I had begun to fear was to be found nowadays only among the insurgent novelists of France, such as Jean Genet and Albert Camus and Jean-Paul Sartre.
With the hesitant exception of one or two war books by returned soldiers, "The Sheltering Sky" alone of the books that I have recently read by American authors appears to bear the spiritual imprint of recent history in the western world. Here the imprint is not visible upon the surface of the novel. It exists far more significantly in a certain philosophical aura that envelopes it"..
..""The Sheltering Sky" is the chronicle of such a journey. Were it not for the fact that the chief male character, Port Moresby, succumbs to an epidemic fever during the course of the story, it would not be hard to identify him with Mr. Bowles himself. Like Mr. Bowles, he is a member of the New York intelligentsia who became weary of being such a member and set out to escape it in remote places. Escape it he certainly does. He escapes practically all the appurtenances of civilized modern life. Balanced between fascination and dread, he goes deeper and deeper into this dreamlike "awayness."
From then on the story is focused upon the continuing and continually more astonishing adventures of his wife, Kit, who wanders on like a body in which the rational mechanism is gradually upset and destroyed. The liberation is too intense, too extreme, for a nature conditioned by and for a state of civilized confinement. Her primitive nature, divested one by one of its artificial reserves and diffidences, eventually overwhelms her, and the end of this novel is as wildly beautiful and terrifying as the whole panorama that its protagonists have crossed.
In this external aspect the novel is, therefore, an account of startling adventure. In its interior aspect, "The Sheltering Sky" is an allegory of the spiritual adventure of the fully conscious person into modern experience. This is not an enticing way to describe it. It is a way that might suggest the very opposite kind of a novel from the one that Paul Bowles has written. Actually this superior motive does not intrude in explicit form upon the story, certainly not in any form that will need to distract you from the great pleasure of being told a first-rate story of adventure by a really first-rate writer" go to: http://www.nytimes.com/books/98/05/17/specials/bowles-sheltering.html
For full article.

The tale of the three sisters and the cup full of sand appears in the novel as allegory...I'd love to know where, if at all, Bowles sourced it....(?)


Posted by Noelia Jiménez |
The Sahara, the great desert (in fact, the third largest in the world, after Antarctica and the Arctic) whose surface reaches almost the nine and a half million kilometers, spanned several countries on the African continent, located to the North of it. As you might expect, in this vast territory, there are several cultures and customs, but all have something in common: tea and their ceremony. A real ritual.


Ceremony of tea in the Sahara

Sahrawis, tea ceremony, devote much time, since they consider it, since its preparation to your taste, as a time to enjoy together with your family, friends or guests. There are some curiosities about this tradition that is worth mentioning:
After mentioning some curiosities and traditions of the ceremony of the tea, then explain the mode of preparation.
Such is the importance that the Berbers overlook tea that, on many occasions, paid large amounts of money or ran many kilometers to get a kilo of tea and thus be able to celebrate this traditional ceremony. In general, they used imported Chinese green tea. From Aromas of tea and if you want a tea Saharan-style, in addition to carrying out the mentioned way of preparation, would recommend using green tea china Gunpowder. This variety is one of the highest-quality green tea and is very appreciated in Morocco.
In addition to the curiosities of the ceremony, it should be noted that tea Sahrawi style provides numerous health benefits, such as facilitating digestion. Also, the made of take it very hot and in full desert, allows that the body is acclimated best to the temperatures high of the foreign. This makes that the body does not make an effort extra and, therefore, performs an energy saving. In addition, it helps blood flow and sweating, so it cools the body.
The tents, the camel and the tea are three names that are associated to the Sahara. The ceremony of prepare, serve and enjoy this drink is without doubt, a ritual widely respected and admired by the Saharans and by visitors who are lucky to enjoy it.
And you, have you been ever in one of these ceremonies? What did you think? We would love to know your opinion!" Go to: http://blog.aromasdete.com/en/sahara-and-tea-a-great-love-story/