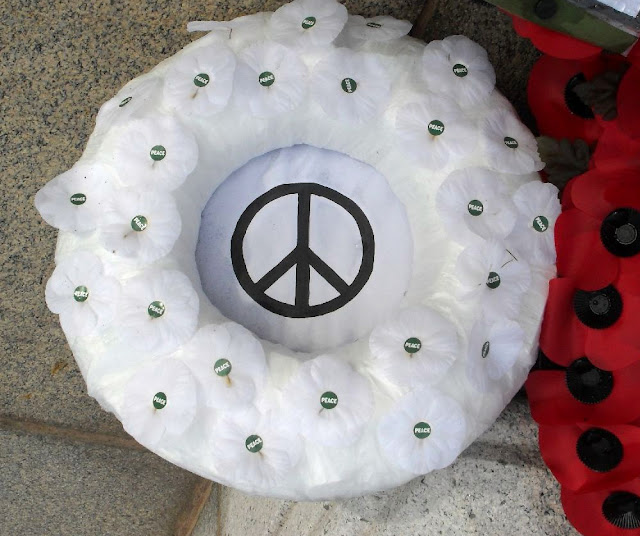 Quote: "It’s that time of year again – when Britain’s “poppy fascism” dominates public life. Television presenters are perhaps the most conspicuous exponents, whereby the paper facsimile of the little red flower must be donned on all lapels.

Now weeks ahead of the official commemoration day, more and more Britons, including TV personalties, are pinning the poppy in public.

It may seem innocuous, but there is a disturbing authoritarianism to the increasing custom. Those who don’t wear the symbol commemorating Britain’s war dead are liable to be castigated and abused for being “traitors”.

The BBC is a classic example. The publicly owned state broadcaster says that its presenters and reporters have the option of not wearing the red poppy. But in practice such is the peer pressure and jingoistic mood of modern Britain that all BBC staff will have to conform to a personal display of the red floral tribute. Bet on it.

Some brave television figures refuse to go along with the established “norm”. It was Channel 4 news presenter Jon Snow who coined the phrase “poppy fascism” a few years ago when he was publicly berated by BBC journalists and other media outlets for refusing to don the flower during his nightly broadcasts. It remains to be seen if the Channel 4 news anchor will this year cave to public pressure – a pressure which seems to be growing every year.

Ever since 1919, Britain and its Commonwealth states, including Australia, Canada and New Zealand hold Remembrance Day on November 11.

It marks the armistice of the First World War in 1918. The first commemoration was held by Britain’s King George V who wore a red poppy, thus inaugurating a tradition that continues to this day. The delicate flower was commonly seen on the battlefields of Belgium and France and came to symbolise the millions of soldiers killed during the four-year-old war.

Across Britain, Remembrance Day is marked by sombre ceremonies in towns and cities during which poppy wreathes are laid at war memorials. The biggest event is held at the Cenotaph in London’s Whitehall. Queen Elizabeth, Prime Minister David Cameron and other political leaders will be among the chief dignitaries, along with senior members of Britain’s armed forces.

So what, you may ask, is objectionable about Britain’s annual Remembrance?

In its early observance, the event was indeed a momentous mourning for the millions who died in the First World War. It was an occasion to vow “never again” should mankind be plagued with such horror.

However, the massive demonstration of grieving and repudiation of war has since given way to an obscene glorification of war. The danger of such co-option was there from the beginning when King George V led the first Remembrance Day. For the British monarch – whose cousins included Germany’s Kaiser Wilhelm II and other European aristocrats – personified the basic background to the conflict. It was an imperialist squabble that exploded into a conflagration that consumed up to 18 million ordinary civilians among the warring nations.

From the very outset therefore, the British commemoration was an opportune way to rehabilitate the monarch and the state’s ruling class who had largely precipitated the war, along with their European elites.

It is a heinous indictment that only two decades after the end of the First World War, the world would be plunged into an even greater conflagration of the Second World War, which resulted in nearly 80 million dead – more than four-fold more. The subsequent war had its antecedents in the imperialist rivalries of the first. Why a second more terrible war should happen was because the war-making imperialist state apparatus had never been held to account. The British rulers were able to deftly reinvent themselves in the eyes of their public as “victors” instead of being seen, as they should have been, as warmongering villains.

To be fair to honourable exceptions, many genuine anti-war Britons were aware of the disgraceful and dangerous co-option by the ruling class. During the 1920s, a movement began which saw war remembrances conducted with white poppies, instead of the red ones that came to be associated with the official event. White poppies are still worn to this day and that tradition has been reinvigorated by campaign groups like Stop the War Coalition.

Nevertheless, Britain has become a discernibly more jingoistic country in which the red poppy has taken on an Orwellian symbolism. Television presenters are dragooned into wearing it, schools and workplace are expected to display it. It has become a badge of loyalty to the state, and those who decline to wear the poppy are fingered as treacherous or disrespectful to “our troops”.

A major cause of the cultural shift is that Britain has become a more warmongering state over the past 20 years. True, it was always a belligerent state, playing the bulldog role to the more powerful and even more warmongering United States.

But former Prime Minister Tony Blair’s criminal partnership with Washington in invading Afghanistan and Iraq has unleashed a virtual permanent state of war. British troops are still stationed in Afghanistan and will be for at least another year. Blair’s warmongering has been continued by David Cameron who launched NATO strikes on Libya in 2011 and who is moving to deploy British warplanes to bomb Syria – without the consent of the Syrian government.

When Cameron joins Queen Elizabeth in laying wreathes at the Cenotaph in London, they will be followed in their footsteps by former British prime ministers, including Tony Blair. Together, they will be honouring not only the dead of the First World War, but British veterans who took part in all subsequent wars, including the destruction of Iraq, Afghanistan and Libya and countless other colonial wars in Africa, Asia and the Middle East. Britain’s dirty war in Northern Ireland will also be exonerated.

In other words, this is not a solemn regret for the dead or for war.

Not a bit of it. It is the warmongering British capitalist state apparatus indulging in an exercise of sanitising Britain’s history of illegal wars, including its present role in Syria. It deifies the war criminal class, which is then “authorised” to keep repeating its crimes. If that’s not fascism, then what is?

Britain’s official war commemoration is certainly not a fitting tribute to victims of war. Because if it were then there would a commitment to stopping wars. But as history shows, Britain’s warmongering has proliferated over the years. That in turn is because the upper echelons of British class society use war commemorations as a cloak to hide their vile belligerence.

A fitting Remembrance Day would be for British citizens to call for the prosecution of Tony Blair and David Cameron as war criminals.

But when British news channels are falling over themselves to wear red poppies out of unthinking “loyalty” or fear of being labelled traitors – that shows how disturbingly authoritarian and conformist British society has become." Go to: http://www.informationclearinghouse.info/article43274.html

"Who is the red poppy designed to remember? The answer might surprise you

Many people in the UK wear a red poppy at this time of year out of a laudable desire to honour and remember the victims of war.
I have often been told by red poppy wearers that they wish to commemorate all those killed in war. It comes as a surprise to some people to discover that this is not the stated purpose of those who produce the red poppy, the Royal British Legion.
According to the Legion, the red poppy does not even commemorate all the British dead.
The Legion is quite explicit in stating that the purpose of the red poppy is to honour British military dead. At a stretch, they will commemorate allied military dead. But civilian dead don’t get a look in.
What about civilian stretcher bearers in the Blitz, killed as they rushed to save the lives of others? Shouldn’t they be honoured on Remembrance Day? No, says the Royal British Legion.
As the Legion would have it, the poppies they produce do not honour the innocent children killed in the bombing of (say) Coventry, let alone the equally innocent children killed in Dresden.
If you click on the “What we remember” link on the Royal British Legion’s website, you will found this blatant statement:
“The Legion advocates a specific type of Remembrance connected to the British Armed Forces, those who were killed, those who fought with them and alongside them.”
I do not wish to engage in such partial and sectarian remembrance. But it gets worse. The front page of this year’s Poppy Appeal website includes a large picture of a current soldier, with the headline:
“The poppy doesn’t only support veterans of the past”.
Current members of the forces are now given at least equal, if not more prominent attention, by the Royal British Legion on the web. The Legion clearly has a political position of encouraging support for the British armed forces as an institution, and by implication supporting war as a means of addressing conflict and celebrating military values such as unquestioning obedience.
Of course, the Legion has every right to adopt this position and to make an argument for it. But let’s not pretend it’s politically neutral.
Despite all this, the Legion does some good work. Their website includes a relatively prominent section about supporting veterans with mental health problems. Sadly, this is overshadowed by all the nationalism, militarism and romanticising of war with which their publicity is glutted.
I want to commemorate all those killed, injured and bereaved in war. That’s why I wear a white poppy, symbolising the need to remember all victims of war and to honour them by working for peace in the present and the future.
You can buy a white poppy at http://www.ppu.org.uk/ppushop.
" Go to:  https://symonhill.wordpress.com/2015/10/26/who-is-the-red-poppy-designed-to-remember-you-might-be-surprised/ 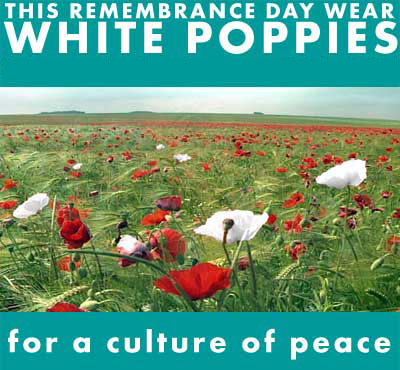