"The Kissinger Diaries: What He Really Thought About Vietnam" Ferguson 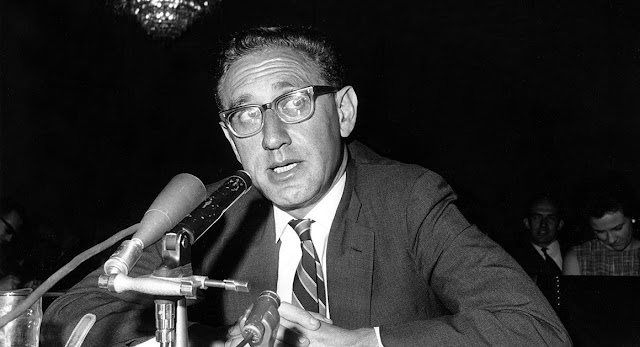 Quote: "It has long been assumed that Henry Kissinger “supported” the Vietnam War throughout the 1960s—and that this was one of the reasons Richard Nixon offered him the job of national security adviser. This view is incorrect. As his private papers and diaries make clear, Kissinger realized by 1966 at the latest that the U.S. intervention in defense of South Vietnam was a doomed enterprise and that only a diplomatic solution would end the conflict.
From a very early stage, Kissinger understood the nature of the problem the United States faced. “All history proves that there is no cheap and easy way to defeat guerrilla movements,” he wrote in February 1962. “South Vietnam has been plagued by Communist Viet Cong attacks ever since it became independent in 1954. Their defeat can only be accomplished by adequate military force. ... However, merely physical security will not solve the problem. The people of South Vietnam must develop a long-term commitment to their government if they wish to attain political and economic stability.”
But how could that happen if the United States undermined the legitimacy of the South Vietnamese government, as happened in 1963, when the Kennedy administration approved a bloody coup against the government of Ngo Dinh Diem? When the news broke of Diem’s murder, Kissinger denounced U.S. policy as “shameful.” “Conditions in Vietnam will, in my judgment, get worse,” he warned.
In October 1965 Kissinger flew to Saigon at the invitation of the U.S. ambassador to South Vietnam, Henry Cabot Lodge Jr. An expert on European history and nuclear strategy, Kissinger had never previously been to Vietnam. He knew little if anything about the country’s history and not a word of its language. But he already knew one thing: This was a war that could not be won by military means.
After briefings in Washington before his trip, he jotted down some revealing notes. “Must realize,” he wrote, “that only possible outcome is limited one … in which VC [Viet Cong, the Communist guerrillas] have some kind of role.” Such a compromise solution was the only good option available. Outright victory in South Vietnam was unattainable because “we know nothing about nation-building.”
Stopping in Honolulu on his way to Vietnam, he met with Lieutenant General Paul S. Emrick, the Pacific Command chief of staff. Emrick assured him “that all the soldiers in Vietnam were being trained to be good will ambassadors handing out candy and defending the villages.” Kissinger replied drily that “perhaps the problem was not only friendship but physical security against assassination. Many people in American cities are paying for protection against gangsters. This doesn’t mean that they love the gangsters; it simply proves that the police are not able to protect them.”

The more U.S. military briefings he heard, the more pessimistic Kissinger became. The fact was that “no one could really explain to me how even on the most favorable assumptions about the war in Vietnam the [war] was going to end.” No one really had a plan for pacification. No one really knew how infiltration was happening. His conclusion was as bleak as it was prescient:

I am quite convinced that too much planning in the government and a great deal of military planning assumes that the opponent is stupid and that he will fight the kind of war for which one is best prepared. However … the essence of guerrilla warfare is never to fight the kind of war your opponent expects. Having moved very many large units into Vietnam … we must not become prisoners now of a large-unit mentality. Otherwise I think that we will face the problem of psychological exhaustion.
Perhaps most unnerving of all were the warnings to Kissinger to stick close to the U.S. embassy and other secure installations as “the losses to the terrorist activity in Saigon were much greater than was being announced.” His parents had good reason to pray for his safe return.


At first sight, Saigon looked safe. It was, Kissinger recorded in his diary, just “like Washington in August … though for some reason [the humidity] does not have quite the enervating effect that it does in a heat wave in the United States.” He found the late summer heat “soft and all enveloping … almost as if you could feel the air physically.” The only problem was that the “constant alteration between air conditioned individual offices and the slightly steamy atmosphere outside causes almost everybody to suffer from a cold.” Kissinger went for a swim at the Cercle Sportif, “which is what passes for the exclusive swimming club in Saigon.” It was “like everything else here … run down and somewhat dilapidated,” but it offered a pleasant relief from the heat. He was shocked to hear from a French girl he met at the pool that the magnificent beaches to the north of Saigon were no longer safe because they were being used “as a rest and recuperation area for the Vietcong.”
To a man who had seen entire towns laid waste in northern Europe in 1944–45, the atmosphere of Saigon was perplexingly unwarlike:

When I was in combat during World War II, or when I visited Korea for the Department of the Army in 1951, one knew precisely when one was in a danger zone and while one was in the danger zone the chances of attack were more or less constant, say 10–20%. In Saigon and throughout Vietnam, one is in a way constantly in a danger zone but there is no appearance of physical danger whatever. At the front in World War II or in Korea one heard the guns and one could almost sense the physical approach of danger. In Saigon everything appears perfectly normal and there is really no choice except conducting one’s business as if one were in downtown New York. If danger should ever materialize, it will be sudden, unexpected, and would have an almost 100% certainty of success. The result is, curiously enough, that there is never any particular fear.

The only sign of insecurity he saw on his first day was that “when cars stop at intersections people look around into adjoining cars and start tensing when people walk up … because it would, of course, be an easy matter to drop a grenade into the car and one would never know whether the Vietnamese driver had not brought one to an ambush deliberately.” Kissinger himself felt safe. It was everyone else who was jumpy. He was woken up one night by “a fusillade of shots,” but this was because one of the embassy guards had discharged his rifle by accident, “whereupon all the guards, and above all the Vietnamese on the outside of the compound, began firing like mad, even though there were no targets.” Kissinger was not content to remain in Saigon, as many American civilians felt safer doing. On October 26 he flew to Hue, the old Vietnamese capital, nestling on the banks of the Perfume River in a valley ringed by high mountains. As they explored the town on foot, he could not fail to notice that he and his State Department escort were the only Americans in the street. Hue was just over 60 miles south of the demilitarized zone that separated North and South Vietnam, running just below the 17th parallel. Kissinger was not foolhardy, at least not at first. When the dean of Hue University urged him to visit an imperial tomb less than three miles outside the city—an area of such heavy Vietcong concentration that he was advised it would take three platoons to get him there—he declined. But one of the Buddhist leaders he wanted to interview insisted on meeting at a pagoda some distance from the town center. Kissinger bleakly noted that “if the VC were in fact as pervasive as the situation indicated it would be an easy matter to knock us off on the way there.” His escort from the embassy, a young John Negroponte, replied that “the VC never engaged in indiscriminate assassination, that if they shot at us we would have the consolation of knowing that we had been singled out for specified targets.”" Go to (Page 1 of 3): http://www.politico.com/magazine/story/2015/10/henry-kissinger-vietnam-diaries-213236

Wasn't aware of Henry's "shady past" hey Niall? Never mind perhaps it was the "fight-for-democracy" that blinkered you! Junior always asks Auntie what she thinks and expects an honest answer..not that they aren't capable of producing same across-the-pond however "the facilitator is all" n'est ce pas? Adieu!"  Post to MediaLens Message board , go to: http://medialens.org/
(tweets from "Abaris" @Williamtheb ).
Posted by Gerard at 14:00