PMQs: Ian Duncan Smith Quizzed Over UNCRPD Inquiry into Systematic Abuses of the Rights of the Disabled, Suicides Caused by Loss of Benefits and the "Public Philanthropy" of the Food Bank. 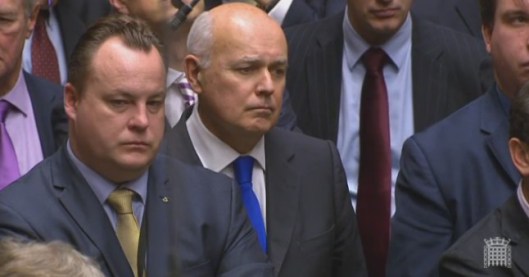 Quote; "No doubt the secretary-in-a-state about work and pensions won’t admit it, but any cabinet minister who comes under such a sustained assault during questions to the Prime Minister must be doing something wrong.
Iain Duncan Smith was attacked over the United Nations’ inquiry into the possibility that the UK has committed grave and systematic abuses of the human rights of disabled people, over suicides committed by benefit claimants due to DWP decisions, and over the vertiginous increase in food bank use. Just because David Cameron had to field the question, that doesn’t mean the Gentleman Ranker shouldn’t take the blame.
All this, on the day his new mascot (ha ha), a demonic-looking furry something called, ironically, Workie, made its debut in a nationwide TV advertising campaign costing more than £8.5 million. That’s money that could clearly have been better-spent elsewhere.
First up was Labour leader Jeremy Corbyn, quoting a party supporter he named ‘Louis’. Prefacing his question with the comment, “This is deeply embarrassing to all of us in this House and, indeed, to this country as a whole,” he read out the following:
“The United Kingdom is currently being investigated by the UN Committee on the Rights of Persons with Disabilities because of allegations of ‘grave and systematic` violations of disabled people’s human rights.
“This is very sad news indeed, but it is even sadder that we need to be investigated because of violations that have occurred. Will the Prime Minister commit to co-operate fully with the inquiry and publish in full the Government’s response to it, so that we can ensure that people with disabilities are treated properly and legally and given full respect by and opportunities in our society?”
Cameron, perhaps briefed by his Work and Pensions secretary, would not. First, he twisted the question, trying to make it about the number of disabled people who have gained work under the Conservatives (tens of thousands, he reckoned. How many lost their jobs when the Tories closed Remploy, again? Nearly 2,000? And how many of those tens of thousands have gained permanent work? He didn’t say.
He continued: “Of course I will look at any United Nations investigation, but sometimes when you look at these investigations you find that they are not necessarily all they are originally cracked up to be.” Like Tory promises on tax credits (for example)?
“There are many disabled people in our world who do not have any of the rights or any of the support that they get here in Britain, and I think we should be proud of what we do as we co-operate with this report.” Shifting the goalposts, there. Bad conditions endured elsewhere in the world are not an excuse for a Conservative Government to worsen conditions here.
The SNP’s Westminster leader, Angus Robertson, touched on a favourite subject of This Writer when he said: “Information has recently been released showing that a coroner has found that a 60-year-old disabled father of two from north London, Mr Michael O’Sullivan, committed suicide following his work capability assessment. The coroner warned that there is a risk of further deaths. The Department for Work and Pensions has reportedly undertaken 60 investigations into suicides that occurred after benefits were withdrawn or reduced, but it has so far refused to publish what it has learned. Will the Prime Minister publish those findings?”
This was something of a missed opportunity as Mr Robertson could have asked why nobody has been prosecuted for causing Mr O’Sullivan to take his life. Never mind; This Writer has something in the pipeline about that, which will hopefully bring out some useful information.
Cameron didn’t have any: “I am aware of the case the hon. Gentleman raises, although I am sure he will understand that it would not be appropriate for me to discuss the specifics of the cases. Suicide is always a tragic and complex issue. We should take these matters incredibly seriously.” More seriously than this Prime Minister, certainly.
“I will look very carefully at the specific question he asks about publication.” But will he actually publish anything? And if so, will it be as opaque as the death figures the DWP released on August 27?
“We have changed the work capability assessment to lead to significant improvements, following a number of independent reviews, to make sure that people get the support that they need, and I think that is vitally important.” No – because the work capability assessment is still based on a disproved theory that illnesses and disabilities are all in benefit claimants’ minds.
Finally, Labour’s Jo Stevens pointed out: “Food bank use has risen by 1,665 per cent since the Prime Minister took office in 2010.”
HOW MUCH? Let’s have that again:
“1,665 per cent”
Is that one of the achievements that make Cameron “proud”, as he stated in his response to Mr Corbyn?
Back to Ms Stevens: “In Cardiff Central, I meet people every week who rely on food banks to feed their families. Does the Prime Minister know how many more families will be relying on food banks as a result of his Government’s cuts to tax credits, and does he care?”
He didn’t, so he quoted some figures about unemployment instead.
“Of course, I do not want anyone in our country to have to rely on food banks,” he lied (if he doesn’t, why have his policies led to such an exponential increase in their use?) before going on to highlight other Tory economic policies, at least one of which – the so-called National Living Wage – demonstrates perfectly why we cannot trust Tories.
A living wage is one that provides enough for people to cover all their costs without going into debt or resorting to benefits – unlike the forthcoming Tory version. If they can lie about that, they can lie about everything else.
And David Cameron, speaking for Iain Duncan Smith, is a dab hand at dishonesty." Go to: http://voxpoliticalonline.com/2015/10/21/serial-shaming-for-iain-duncan-smith-in-prime-ministers-questions/