Will "The New Ukraine" Destroy its Creator? #Monsanto #GMOs 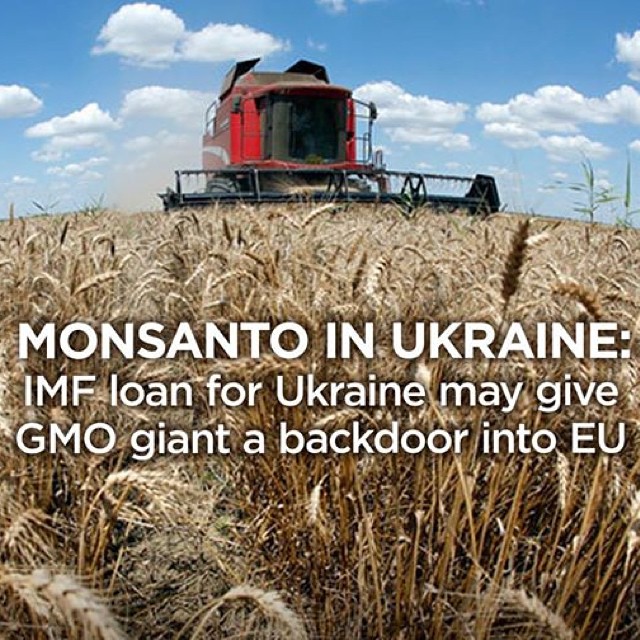 Quote; "The World Bank and International Monetary Fund (IMF) is helping biotech run the latest war in Ukraine. Make no mistake that what is happening in the Ukraine now is deeply tied to the interests of Monsanto, Dow, Bayer, and other big players in the poison food game.
Monsanto has an office in Ukraine. While this does not shout ‘culpability’ from every corner, it is no different than the US military’s habit to place bases in places that they want to gain political control. The opening of this office coincided with land grabs with loans from the IMF and World Bank to one of the world’s most hated corporations – all in support of their biotech takeover.
Previously, there was a ban on private sector land ownership in the country – but it was lifted ‘just in time’ for Monsanto to have its way with the Ukraine.
In fact, a bit of political maneuvering by the IMF gave the Ukraine a $17 billion loan – but only if they would open up to biotech farming and the selling of Monsanto’s poison crops and chemicals – destroying a farmland that is one of the most pristine in all of Europe. Farm equipment dealer, Deere, along with seed producers Dupont and Monsanto, will have a heyday.*
In the guise of ‘aid,’ a claim has been made on Ukraine’s vast agricultural riches. It is the world’s third largest exporter of corn and fifth largest exporter of wheat. Ukraine has deep, rich, black soil that can grow almost anything, and its ability to produce high volumes of GM grain is what made biotech come rushing to take it over.
As reported by The Ecologist, according to the Oakland Institute:

“Whereas Ukraine does not allow the use of genetically modified organisms (GMOs) in agriculture, Article 404 of the EU agreement, which relates to agriculture, includes a clause that has generally gone unnoticed: it indicates, among other things, that both parties will cooperate to extend the use of biotechnologies.
There is no doubt that this provision meets the expectations of the agribusiness industry. As observed by Michael Cox, research director at the investment bank Piper Jaffray, ‘Ukraine and, to a wider extent, Eastern Europe, are among the most promising growth markets for farm-equipment giant Deere, as well as seed producers Monsanto and DuPont’.” 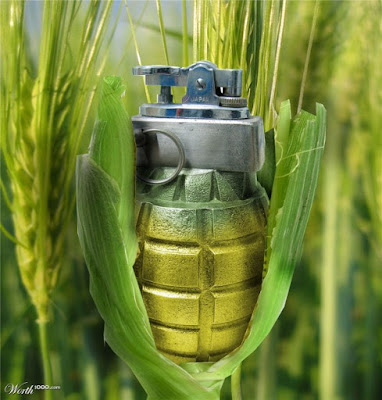 The nation WAS Europe’s breadbasket – and now in an act of bio-warfare, it will become the wasteland that many US farmlands have become due to copious amounts of herbicide spraying, the depletion of soil, and the overall disruption of a perfect ecosystem.
The aim of US government entities is to support the takeover of Ukraine for biotech interests (among other strategies involving the prop-up of a failing cabalistic banking system that Russia has also refused with its new alignment with BRICS and its own payment system called SWIFT). This is similar to biotech’s desired takeover of Hawaiian islands and land in Africa.
The Ukraine war has many angles that haven’t been exposed to the general public – and you can bet that biotech has their hands in the proverbial corn pie.
Originally Published: Global Research
" Go to:  http://www.fooddemocracynow.org/blog/2015/feb/19-2

*Italics mine; "Heyday"? For about a decade until the self-crossed irradiated mutants spawned around Chernnobyl decide to tear up their roots and go seaching for (with the intention to blind), their errant creators!
Posted by Gerard at 00:15