Quote; "AS I READ The Devil’s Chessboard: Allen Dulles, the CIA, and the Rise of America’s Secret Government, a new book by Salon founder David Talbot, I couldn’t help thinking of an obscure corner of 1970s history: the Safari Club.

Dulles — the Princeton man and white shoe corporate lawyer who served as CIA director from 1953 to 1961, still the longest tenure in agency history — died in 1969 before the Safari Club was conceived. And nothing about it appears in The Devil’s Chessboard. But to understand the Safari Club is to understand Allen Dulles and his milieu.
Any normal person would likely hear the Safari Club saga as a frightening story of totally unaccountable power. But if there’s one thing to take away from The Devil’s Chessboard, it’s this: Allen Dulles would have seen it differently — as an inspiring tale of hope and redemption.
Because what the Safari Club demonstrates is that Dulles’ entire spooky world is beyond the reach of American democracy. Even the most energetic post-World War II attempt to rein it in was in the end as effective as trying to lasso mist. And today we’ve largely returned to the balance of power Dulles set up in the 1950s. As Jay Rockefeller said in 2007 when he was chairman of the Senate Intelligence Committee, “Don’t you understand the way intelligence works? Do you think that because I’m chairman of the Intelligence Committee that I just say ‘I want it, give it to me’? They control it. All of it. All of it. All the time.” 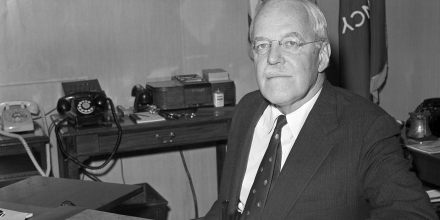 While there, Turki, who’d graduated from Georgetown University in the same class as Bill Clinton, delivered a speech at his alma mater that included an unexpected history lesson:


In 1976, after the Watergate matters took place here, your intelligence community was literally tied up by Congress. It could not do anything. It could not send spies, it could not write reports, and it could not pay money. In order to compensate for that, a group of countries got together in the hope of fighting communism and established what was called the Safari Club. The Safari Club included France, Egypt, Saudi Arabia, Morocco, and Iran … so, the Kingdom, with these countries, helped in some way, I believe, to keep the world safe when the United States was not able to do that. That, I think, is a secret that many of you don’t know.

Turki was not telling the whole truth. He was right that his Georgetown audience likely had never heard any of this before, but the Safari Club had been known across the Middle East for decades. After the Iranian revolution the new government gave Mohamed Hassanein Heikal, one of the most prominent journalists in the Arab world, permission to examine the Shah’s archives. There Heikal discovered the actual formal, written agreement between the members of the Safari Club, and wrote about it in a 1982 book called Iran: The Untold Story.
And the Safari Club was not simply the creation of the countries Turki mentioned — Americans were involved as well. It’s true the U.S. executive branch was somewhat hamstrung during the period between the post-Watergate investigations of the intelligence world and the end of the Carter administration. But the powerful individual Americans who felt themselves “literally tied up” by Congress — that is, unfairly restrained by the most democratic branch of the U.S. government — certainly did not consider the decisions of Congress to be the final word.
Whatever its funding sources, the evidence suggests the Safari Club was largely the initiative of these powerful Americans. According to Heikal, its real origin was when Henry Kissinger, then secretary of state, “talked a number of rich Arab oil countries into bankrolling operations against growing communist influence on their doorstep” in Africa. Alexandre de Marenches, a right-wing aristocrat who headed France’s version of the CIA, eagerly formalized the project and assumed operational leadership. But, Heikal writes, “The United States directed the whole operation,” and “giant U.S. and European corporations with vital interests in Africa” leant a hand. As John K. Cooley, the Christian Science Monitor’s longtime Mideast correspondent, put it, the setup strongly appealed to the U.S. executive branch: “Get others to do what you want done, while avoiding the onus or blame if the operation fails.”
This all seems like something Americans would like to know, especially since de Marenches may have extended his covert operations to the 1980 U.S. presidential election. In 1992, de Marenches’ biographer testified in a congressional investigation that the French spy told him that he had helped arrange an October 1980 meeting in Paris between William Casey, Ronald Reagan’s 1980 campaign manager, and the new Islamic Republic of Iran. The goal of such a meeting, of course, would have been to persuade Iran to keep its American hostages until after the next month’s election, thus denying Carter any last-minute, politically potent triumph.
De Marenches and the Safari Club certainly had a clear motive to oust Carter: They blamed him for allowing one of their charter members, the Shah, to fall from power. But whether de Marenches’ claims were true or not, we do know that history unfolded exactly as he and the Safari Club would have wished. The hostages weren’t released until Reagan was inaugurated, Reagan appointed Casey director of the CIA, and from that point forward America’s intelligence “community” was back in business.
And yet normal citizens would have a hard time just finding out the Safari Club even existed, much less the outlines of its activities. It appears to have been mentioned just once by the New York Times, in a profile of a French spy novelist. It likewise has made only one appearance in the Washington Post, in a 2005 online chat in which a reader asked the Post’s former Middle East bureau chief Thomas Lippman, “Does the Safari Club, formed in the mid-70s, still exist?” Lippman responded: “I never heard of it, so I have no idea.”

*Italics Mine. Also see: "Forbidden History and "The Reich of the Black Sun" Go to: http://gkhales.blogspot.co.uk/2015/09/forbidden-history-and-reich-of-black-sun.html
**The fact that J.F.K was a sometime suicidal catholic never gets a mention (italics mine)!

Before joining First Look, Jon Schwarz worked for Michael Moore’s Dog Eat Dog Films and was Research Producer for Moore’s Capitalism: A Love Story.
He’s contributed to many publications, including The New Yorker, The New York Times, The Atlantic, The Wall Street Journal, Mother Jones and Slate, as well as NPR and “Saturday Night Live.”
In 2003 he collected on a $1,000 bet that Iraq would have no weapons of mass destruction.