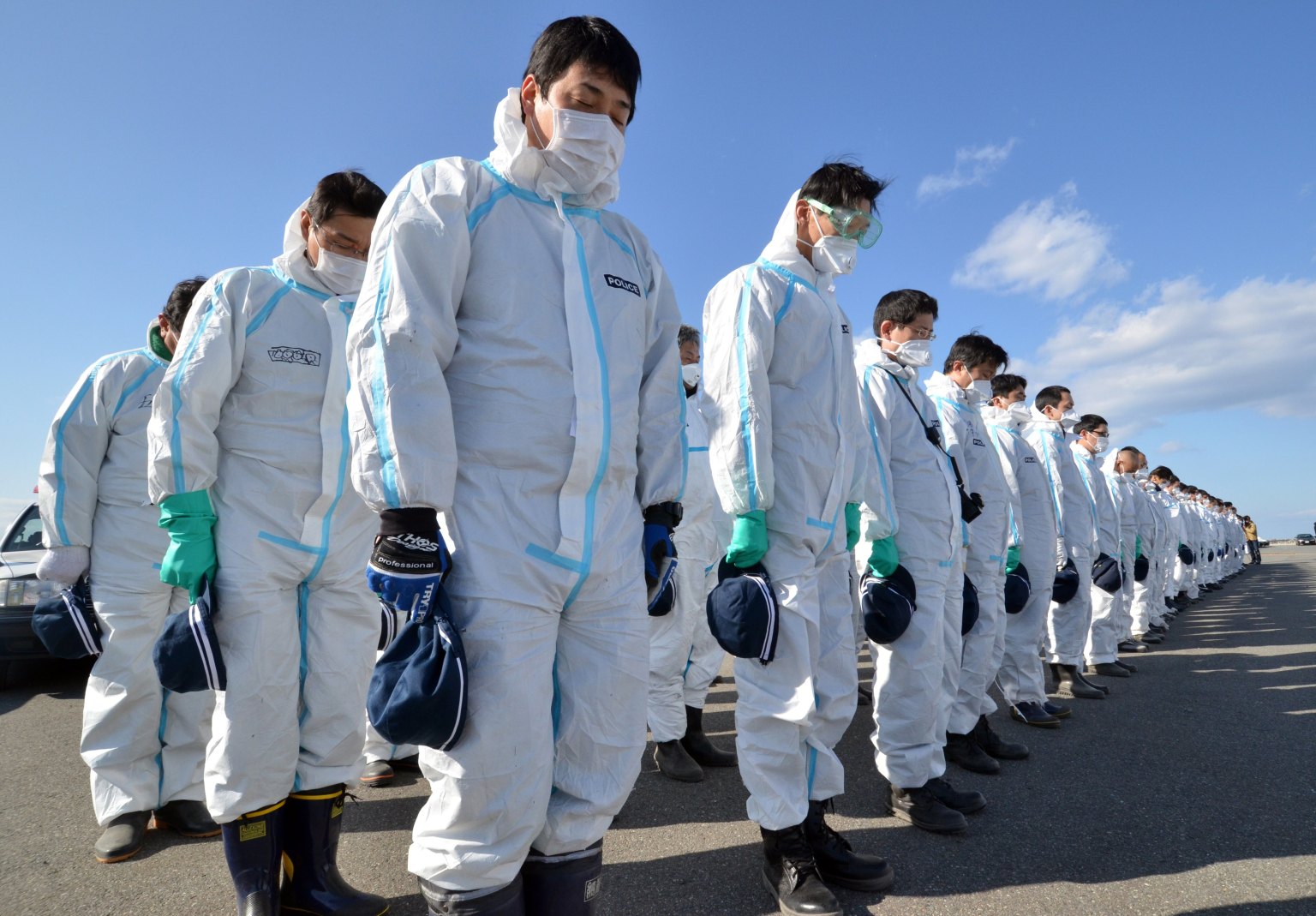 Quote; "80 km distance to Fukushima: “40 micro sv / hr = 350 Millisievert per year, that is 145 times the average annual external dose limit, It is even more than 3 times the Dr. Evil Yamashita Dose limit of 100 mSv. comparison: 500 mSv were are also equivalent of 1,7 km distance to Ground Zero after the Hiroshima bomb explosion. I think this area is irradiated with more than 3,000,000 becquerel of various radionuclides (Sr90, Cs137, Pu241) per square meter. Even pro nuclear ICRP standard suggest evacuation.” https://www.facebook.com/photo.php?v=10200465957291378&set=vb.1830343586&type=2&theater
Two years earlier: Japan goes the same way as Belarus: Dictatorship – a deep insight 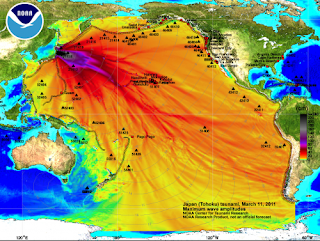 IAEA invites people to come back to Fukushima. Wth kind support of the local and national authorities, the World Health Organisation, and the Fukushima Medical University. Irradiated ares will become cheap Land. Very attractive.
This IAEA program means: Resettlement of people in irradiated areas, “overcoming” the situation by ignoring the situation, Rehabilitation means: Restoration. NOT of the people, but of the IRRADIATED land, into “normality”. Radiation is forced ON the people, INTO the people, by calling it normality, and encouraging the people to come back. This program is fed by the IAEA annual budget of over 300 millon EUR and by the nuclear industry: http://www.iaea.org/About/budget.html
The same was done with CORE / ETHOS in Belarus: NO evacuation, but resettlement: CORE – a Chernobyl aid program that kills
They calculate cheap. Here is an example: The ICRP says the cost per person, and “rem” (1 rem = 10 mSv) is 10 to 250 US dollars. (ICRP publication 22 1973) BEIR 1972 page 69 / 70: Created by the National Academy of Sciences: suffering is “converted” in dollars. In the 1970ies the annual health care costs per capita in the U.S. estimated at $ 400 lump sum for medical expenses, based on $ 80 billion for medical expenses in 1970 (200 million citizens). Mr. Lederberg (BEIR) said that when allowed 1.7 mSv per year (mSv for nuclear workers 50 / a) is increased in 30 years, the total level of disease in the U.S.increases by 0.5 to 5%. 10 mSv increase 0.1 to 1%. In 30 years (one generation) causes $ 12,000 per head (30 x $ 400). 10 mSv per generation would result in 10-120 dollars costs (0.1 to 1% of 12,000 dollars): http://www.icrp.org/publication.asp?id=ICRP+Publication+22
“The UN Rapporteur Anand Grover criticizes the use of “cost-benefit analysis” made by the Japanese authorities (following the ICRP recommendations) since such analysis does not respect the fundamental right to health of individuals.”
MORE: http://independentwho.org/en/2013/06/22/grover-stunning-report/
New York Times October 16, 1990: President Bush set up a 100 million dollar fund to compensate victims of the nuclear weapons program. “Less expensive than paying injury and liability claims directed by the courts” http://www.nytimes.com/1990/10/16/us/us-fund-set-up-to-pay-civilians-injured-by-atomic-arms-program.html GENETIC EFFECTS not taken into account
24 years later: http://mainichi.jp/…/news/20140104p2a00m0na005000c.html TEPCO wants MONEY from VICTIMS!
8 years later: http://www.rri.kyoto-u.ac.jp/NSRG/en/Novosti.html#Yr0011 LIQUIDATORS, fire & forget!
11 years before: https://tekknorg.wordpress.com/2013/03/27/dr-bertell-on-tmi-radiation-chernobyl-iaea/#jp-carousel-4201 Three Mile Island Victims unheard!
This excludes ALL genetic effects, all cancerours effects, EVERYTHING is excluded, except Radiophobia:
“it is recognized by the World Health Organization that the International Atomic Energy Agency has the primary responsibility for encouraging, assisting and coordinating research and development and practical application of atomic energy for peaceful uses throughout the world without prejudice to the right of the World Health Organization to concern itself with promoting, developing, assisting and coordinating international health work, including research, in all its aspects. ” http://www.iaea.org/Publications/Documents/Infcircs/Others/inf20.shtml#note_c
VERSUS:
Radiation Is Always Dangerous, Says World Health Organization Director-General:  http://concernforhealth.org/radiation-is-always-dangerous-says-world-health-organization-director-general/
BECAUSE of the IAEA-WHO CONTRACT, HERE ARE WHO’s CANCER CRITERIA:
The main way in which the “radiation protection industry” has succeeded in hugely underrating the ill-health caused by nuclear power is by insisting on a group of extremely restrictive definitions as to what qualifies as a radiation-caused illness statistic. For example, under IAEA’s criteria:
>    If a radiation-caused cancer is not fatal, it is not counted in the IAEA’s figures
>    If a cancer is initiated by another carcenogen, but accelerated or promoted by exposure to radiation, it is not counted.
>    If an auto-immune disease or any non-cancer is caused by radiation, it is not counted.
>    Radiation-damaged embryos or foetuses which result in miscarriage or stillbirth do not count
>    A congenitally blind, deaf or malformed child whose illnesses are radiation-related are not included in the figures because this is not genetic damage, but rather is teratogenic, and will not be passed on later to the child’s offspring.
>    Causing the genetic predisposition to breast cancer or heart disease does not count since it is not a “serious genetic disease” in the Mendelian sense.
>    Even if radiation causes a fatal cancer or serious genetic disease in a live born infant, it is discounted if the estimated radiation dose is below 100 mSv [mSv= millisievert, a measurement of radiation exposure. One hundred millsievert is the equivalent in radiation of about 100 X-Rays].
>    Even if radiation causes a lung cancer, it does not count if the person smokes — in fact whenever there is a possibility of another cause, radiation cannot be blamed.
>    If all else fails, it is possible to claim that radiation below some designated dose does not cause cancer, and then average over the whole body the radiation dose which has actually been received by one part of the body or even organ, as for instance when radio-iodine concentrates in the thyroid. This arbitrary dilution of the dose will ensure that the 100 mSv cut-off point is nowhere near reached. It is a technique used to dismiss the sickness of Gulf War veterans who inhaled small particles of ceramic uranium which stayed in their lungs for more than two years, and in their bodies for more than eight years, irradiating and damaging cells in a particular part of the body.
quote by Dr. Rosalia Bertell, November 1999 issue of The Ecologist, pp. 408-411: http://ratical.org/radiation/NAvictims.html

"Belarus has all the information Japan needs"

At the Chernobyl IAEA forum the term “Radiophobia” was invented and used: “What’s worse, the IAEA is going public these days with statements ridiculing the so called “radiophobia” of the population and calling for an end of aid programs, which, according to the IAEA report of 2005, only serve to instil a victim mentality in a totally healthy population – a claim not only cynical, but potentially dangerous for the health of the affected population.” Source: http://www.ippnw-students.org/chernobyl/coverup.html
“Presently the international organizations (WHO, IAEA) recognize as the main cause of increase of thyroid cancer in liquidators and children population after the accident their irradiation with radioactive iodine, I-131. The rest of diseases, they suppose, are provoked by psycho-emotional reactions..” (!!!…RADIOPHOBIA…!!!) There is no linear dose effect correlation, but “The bimodal dependence of effects on dose was revealed for all studied parameters. Namely, effects increased at low doses, reached maximum (for low doses), then decreased (in some cases the effect sign reversed) and thereafter increased with the increase of dosage”: http://www.rri.kyoto-u.ac.jp/NSRG/reports/kr21/kr21pdf/Burlakova.pdf IGNORED BY IAEA, UNSCEAR, ICRP, WHO
Japan becomes a dictatorship, as Belarus: Japan approves new state secrecy bill to combat leaks http://www.bbc.co.uk/news/world-asia-25102915
The IAEA advises atomic states, is the PR agency for the atomic miliatry and industry, reports to the security council and has the five VETO powers of the U.N. as members. They want to blame the radiation victims, because of their fear of radiation – called RADIOPHOBIA by the IAEA: Japan officials are going to call radiation measurements illegal and that they are disturbing the industry. Health plays no role. They are adapting the IAEA ideology of Radiophobia: The fear of radiation is worse than the radiation. And the declining birth rates among belarusians under the age of 30 – declared by the IAEA with “Radiophobia”: http://www.iaea.org/inis/collection/NCLCollectionStore/_Public/28/073/28073803.pdf – quote “2. PSYCHOLOGICAL IMPACTS OF NUCLEAR ACCIDENTS : Soon after the discovery of ionizing radiation, it was realized that radiation could harmfully affect skin tissues, body organs and the human body as a whole beside the genetic effects. Lately after the drop of the first atomic bombs in Hiroshima and Nagasaki and also after Three-Miles-Island and Chernobyl accidents anew phenomenon described as RADIOPHOBIA have become apparent and widely spread..” PAGE 338.
Protection against Fear, not against Radiation!
Contract between IAEA and Fukushima Medical Universitys (“Dr” Yamashita)
“…the IAEA will endeavour to organize conferences, seminars and workshops, in cooperation with the University, with the aim of enhancing public awareness of radiological effects on human health and addressing the issue of “radiation fear” and post-traumatic stress disorders in the Fukushima population…”
http://www.mofa.go.jp/policy/energy/fukushima_2012/pdfs/fukushima_iaea_en_06.pdf
BEIR 1972 still assumed it will come to more than 6.2 deaths per 100 people when irradiated with 1 sievert, the same panel twenty years later, already figured at 12.4 cancer deaths. ICRP has confirmed in 1966 that natural radiation is harmful! ICRP Publication Number 8 from 1966 on page 60. in relation to the health damage caused by natural radiation for the bulk of the world’s population is a risk of sixth order (1 to 10 dead per million per rad / gray) in a few areas with high natural background radiation the risk fifth order. 10 to 100 dead per million and rad (gray). and in 1977 the ICRP publication number 26 said, that, in this sense, regional differences of the natural radiation are so regarded, that the corresponding differences include the damage. and in the ’80s the natural radiation was simply doubled. and in 2011 it became the twentyfold in japan: 20 mSv/a. Natural radiation is used as an excuse to increase artificial radiation with radionuclide-antagonists.
They call that radiation-protection!
1971: the discoverer of plutonium and president of the USAEC (“protects” health and advertises nuclear industry at the same time, later AEC, then NRC) Glenn Theodore Seaborg resigns – at the same time the ICRP reduced the the additional maximum dose near reactors for the public from 500 mrem/annual (5 mSv/a) to 5 mrem/annual (0,05 mSv/a). Thanks to Prof. Ernest Sternglass and his studies about infant mortality near reactors;: http://www.ratical.org/radiation/inetSeries/ejs1192.html
This means: Poeple, come back! We, as IAEA tell you (with the kind support of W.H.O.) and WE protect you against the Truth. Isn’t that a finde and murderous deal? All under the eyes of the world. THIS a dictatorship. And Japan became Belarus.
100 mSv lie: http://www.strahlentelex.de/The_100_Millisievert_Threshold_Lie_Statement_German_GSS.pdf
World Health Organisation ignores health of irradiated people: https://tekknorg.wordpress.com/2012/05/27/margaret-chan-versus-world-health-organisation/
Lukashenka wants to repopulate Chernobyl Chernobyl’s Zone “quickly” http://charter97.org/en/news/2009/4/26/17680/
JAPAN! BEWARE OF IAEA AND CORE! Do not accept Dose Limits, because you can not accept gun shots on children!" Go to: https://tekknorg.wordpress.com/2013/11/27/iaea-protects-against-truth-and-irradiates-people/

Also see; "Mycology and Bio-Remediation"
..or; "Why Should #Fukushima Become a Japanese "Bearded-Lady"?" Go to: http://gkhales.blogspot.co.uk/2014/10/mycology-and-bio-remediation.html 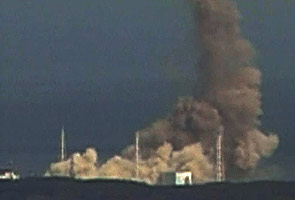