Quote: "The Department for Work and Pensions has admitted making up comments from supposed "benefit claimants" that appeared in a leaflet about sanctions.
The leaflet, which has now been withdrawn, included positive example stories from people who claimed to have interacted with the sanctions system.
In one example, titled "Sarah's story", a jobseeker is quoted as being "really pleased" after a cut to her benefits supposedly encouraged her to re-draft her CV.
"It's going to help me when I'm ready to go back to work," the fabricated quote reads. 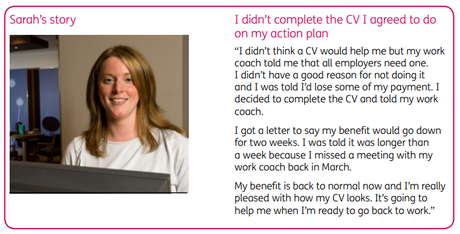 Another, by a benefit claimant supposedly called "Zac", details the sanctions system working well.
But in response to a freedom of information request by the Welfare Weekly website the DWP said the quotes were not actually real cases and that the photos were not of real claimants.
“The photos used are stock photos and along with the names do not belong to real claimants. The stories are for illustrative purposes only," the department said.
The leaflet, a copy of which is available in full at Welfare Weekly, contains no suggestion that the stories are not real.
The revelation is controversial because the sanctions system has been criticised for causing extreme hardship and being operated in an unfair and arbitrary way.
In March this year Parliament's Work and Pensions Select Committee said there was evidence that sanctions were geared towards punishing people for being unemployed and might not actually help them find work.
The MPs said there was evidence that the benefit cuts for unemployed people caused more problems than they solved and might be "purely punitive".
Previous widely-criticised decisions include people being sanctioned for missing jobcentre appointments because they had to attend a job interview, or people sanctioned for not looking for work because they had already secured a job due to start in a week’s time.
In one case a man with heart problems was sanctioned because he had a heart attack during a disability benefits assessment and thus failed to complete the assessment.
Charities including Crisis and the Joseph Rowntree Foundation say the sanctions are responsible for a significant increase in homelessness and rough sleeping in Britain under David Cameron's government.
Mark Serwotka, the general secretary of the PCS union, told the Independent that the department's actions were "sinister".
Another example shows the system working well "It's disgraceful and sinister that DWP has been trying to trick people into believing claimants are happy to have their benefits stopped or threatened. Sanctions are unnecessarily punitive and counterproductive, and should be scrapped," he said.
Dan Scorer, Head of Policy at the learning disability charity Mencap said the DWP had misled the public.
"DWP's made up case studies present an unrepresentative view of the sanctions regime and its impact on disabled people. Benefits are a lifeline to many people with a learning disability who rely on them to make ends meet.
"We know many people have been sanctioned because Jobcentre staff don't understand their needs and place unrealistic demands on them while not providing support they need. To mislead the public on the effects of benefit sanctions in this way is unacceptable.”
The DWP added in the FOI response to the website: “We want to help people understand when sanctions can be applied and how they can avoid them by taking certain actions. Using practical examples can help us achieve this.
“We have temporarily changed the pictures to silhouettes and added a note to make it more clear that these are illustrative examples only.
“We will test both versions of the factsheet with claimants and external stakeholders to further improve it in the future. This will include working with external organisations.”
A Department for Work and Pensions spokesman told the Independent: “The case studies were used for illustrative purposes to help people understand how the benefit system works. They’re based on conversations our staff have had with claimants. They have now been removed to avoid confusion”." Go to: http://www.independent.co.uk/news/uk/politics/dwp-admits-making-up-quotes-by-benefit-claimants-saying-sanctions-helped-them-10460351.html
Posted by Gerard at 09:41