Quote: "CAMPAIGNERS have revealed details of the dossier of complaints which led to the UN launching an investigation into allegations of "grave and systematic violations” of disabled people’s human rights in the UK.
Disabled People Against Cuts (DPAC), a grassroots campaign group, has published a list of more than 40 issues which it submitted as evidence to the UN that "attacks are being carried out in every area" of disabled people's lives by the UK government.
The list ranges from the introduction of the bedroom tax and controversial “fitness for work” tests, to the impact of benefit sanctions and cuts to mobility allowances.

The campaigners say the UN inquiry - the first of its kind - has “great historic importance” and will examine the “vicious and punitive attacks” on disabled people’s independent living, as well as cuts which have led to unnecessary deaths.
Last week the Sunday Herald revealed how UN officials will visit the UK in the next few months, following the launch of the formal investigation by the UN's Committee on the Rights of Persons with Disabilities (CRPD).
Scottish disability charity Inclusion Scotland said it has been advised a visit by the Special Rapporteur and members of the committee on the rights of persons with disabilities is expected in the "near future". 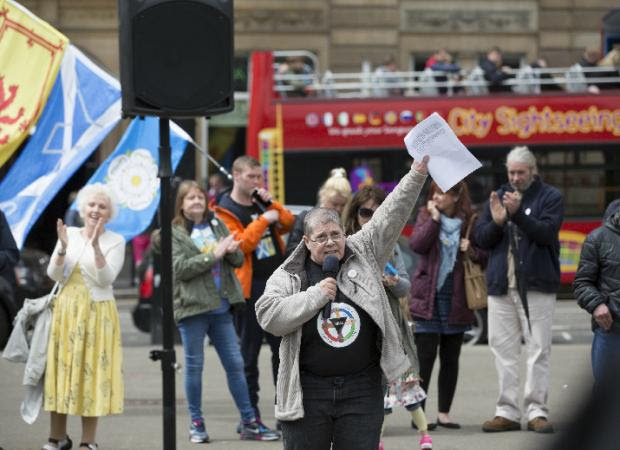 A spokeswoman for DPAC, which was formed by a group of disabled people in protest against austerity cuts, said she could not give any more details of what stage the UN investigation is at due to confidentiality, but that it would be “getting more active in the next few months".
She said: “Quite simply we’d like disabled people’s rights to be respected rather than torn away at every opportunity.
“The inquiry has already shown that disabled people can and must fight back, not just in the UK but in other countries where violations are happening due to austerity and a wilful neglect of disabled people by governments.”
She added: "As the submission was put together by a team of three people it has proved...that we do not need to wait for big organisations to act, nor have a large staff or millions in funding to create change and resistance."
DPAC said it first made a complaint over a 'regression' of disabled people’s rights to the UN's CRPD in May 2013, based on statistics and personal testimonies, which was followed by a further submission of evidence.
The 41 issues which it has outlined include the impact of the bedroom tax, problems which have been caused by changes to disability benefits and an overall 1% cap on annual benefit rises.
The submission has also raised concerns about the impact of benefit sanctions and workfare programmes, as well as inaccessible public transport and cuts to mobility allowances.
The DPAC spokeswoman said: “Many disabled people are facing a multitude of attacks on their human rights and living standards.
“It is rarely just one or two issues per person. This is the crucial point in the current retrogression of the human rights of disabled people - attacks are being carried out in every area of our lives.”
She added some situations had become even worse since the group first submitted their complaint to the UN in 2013.


“There has been a massive rise in the numbers of disabled people being sanctioned and left reliant on food banks, and the increasing levels of malnutrition people are suffering due to increased poverty,” she added. A spokesman for the Department of Work and Pensions (DWP) said: “All United Nations inquiry processes are confidential and we are unable to comment on the speculation surrounding this."" Go to: http://www.heraldscotland.com/news/homenews/13648683.Revealed__contents_of_dossier_which_sparked_UN_probe_over_disabled__human_rights_violations_/?ref=twtrec