"War on the Poorest": The Proxy War in #Yemen Continues with the Backing of Britain and America; "No Holds Barred"! 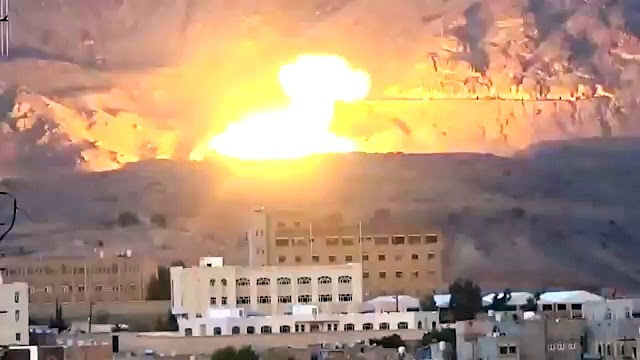 Quote: "All sales of UK weapons which could be used in Saudi Arabia's military action in Yemen should be halted until the completion of an independent inquiry into alleged breaches of human rights, a parliamentary report has said.
The joint report by the House of Commons Business and International Development Committees said it had been presented with evidence of "clear violations" of international humanitarian law (IHL) including the death of 47 civilians - among them 21 women and 15 children - and injuries to 58 more when a house hosting a wedding party was struck by two missiles fired by military aircraft.
But the publication exposed deep differences between MPs on the issue, as the Commons Foreign Affairs Committee released its own rival report insisting that exports should be blocked only if the UK courts rule the weapons sales unlawful.
The highly unusual decision to publish two simultaneous reports is a mark of the depth of controversy over claims that UK-made armaments are being used in indiscriminate bombing raids on civilian targets by the Saudi-led coalition fighting Shia rebels known as the Houthis in Yemen.
International medical aid charity Medecins Sans Frontieres has accused the coalition of war crimes for an air strike on its hospital which killed at least 11 last month.
An internal investigation launched by Saudi Arabia is regarded as inadequate by campaigners, including the Campaign Against Arms Trade (CAAT), which is taking legal action to seek the suspension of arms export licences to the country.
The FAC's Conservative chairman Crispin Blunt is understood to have drawn up the rival document after objecting to proposals to issue the call for immediate suspension under the banner of the House of Commons Committees on Arms Export Controls (CAEC) - a panel which brings together the cross-party committees for Business, Foreign Affairs, Defence and International Development.
Reports suggested that Mr Blunt walked out of a private meeting of CAEC to prevent a vote being taken on the draft report, which he regarded as one-sided. Meanwhile, the Defence Committee has given no indication of whether it intends to publish its own report.
Conservative MP Chris White, who chaired the CAEC inquiry into the exports and is a member of the Business Committee, said: "The UK led the way in establishing international humanitarian law to govern the sale of arms. The conflict in Yemen has raised serious concerns that we are not showing equal determination in ensuring that these are respected.
"During this inquiry we have heard evidence from respected sources that weapons made in the UK have been used in contravention of International Humanitarian Law. The Government can no longer wait and see and must now take urgent action, halting the sale of arms to the Saudi-led coalition until we can be sure that there is no risk of violation." Go to: http://www.newsandstar.co.uk/news/national/article/MPs-urge-halt-to-UK-arms-sales-over-Saudi-Arabia-human-rights-breaches-85d6bce7-676e-42c1-8ae4-331981704b6a-ds For full article.

Quote; "Nb. Many of the videos of the "Nuke Strike" in Yemen are now..."no videos found" on Blogger embed...url paste will not reveal either, go to:  https://www.youtube.com/watch?time_continue=84&v=4VZmxDCbRVM and/or see the Arafel archive.." Go to: http://www.arafel.co.uk/2017/09/rods-of-god-and-space-rocket-x-us.html

Quote; "This past Tuesday, President Barack Obama delivered his final speech to the United Nations General Assembly in New York. Though he tried to sound optimistic, he couldn’t help but strike a rueful tone. Gone was the global media darling who electrified world leaders in 2009—that Obama was “determined to act boldly and collectively on behalf of justice and prosperity at home and abroad.” The graying, deliberate Obama of 2016 could offer only limited aspirations of a “course correction” in world politics, while pondering why cycles of conflict and suffering persisted. Though the president advocated for the “hard work of diplomacy” in places like Syria, he also elaborated on one of his recent, common refrains, cautioning that in the Middle East “no external power is going to be able to force different religious communities or ethnic communities to co-exist for long.” Across the region, “we have to insist that all parties recognize a common humanity and that nations end proxy wars that fuel disorder,” Obama said. 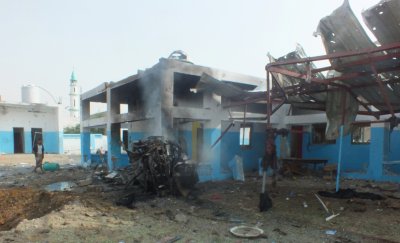 A day later, the U.S. Senate held a rare debate on the sale of arms destined for another war in the Middle East. The deal, for $1.15 billion in weaponry to Saudi Arabia, including over 150 Abrams tanks, is a drop in a bucket: more than $100 billion in arms sales to the kingdom have already been approved by the Obama administration. But a year and a half into the kingdom’s relentless war in Yemen, opponents of the new sale see it as an outright affirmation of Washington’s involvement in a deadly, strategically incoherent war that the White House has kept largely quiet about. What’s more, it is at odds with Obama’s apparent distaste for regional proxy wars.
Since March 2015, Saudi Arabia has targeted Yemen’s Shia Houthi militias and their allies, loyalists of former President Ali Abdullah Saleh, who two years ago seized the Yemeni capital Sanaa by force. Several months later, they drove the Saudi-backed President Abd Rabbu Mansour Hadi into exile. When Saudi King Salman announced the intervention in Yemen—an intervention the kingdom has painted as a proxy war with Iran, its regional foe—the White House immediately authorized a support package that included intelligence-sharing and logistical support for military operations. That package has seen the United States deliver more than 40 million pounds of fuel to Saudi jets over the past 18 months, according to U.S. Central Command. The Saudis would be crippled without direct U.S. military assistance, particularly aerial refueling, which continues unabated. 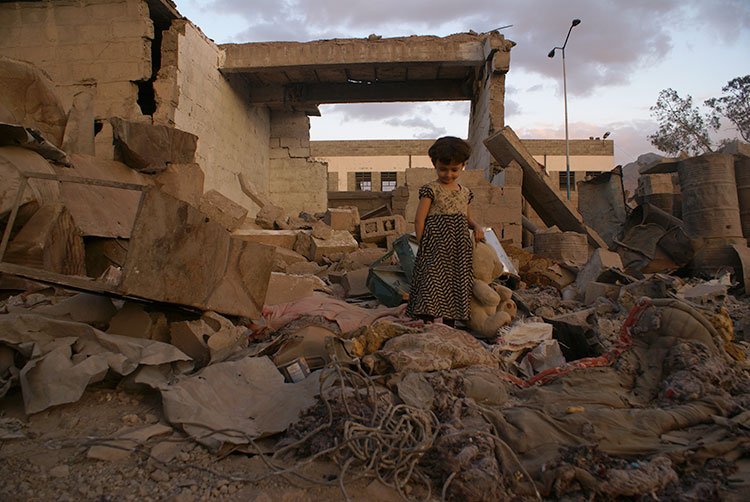 Supporters of the new arms package portrayed it as necessary support after the Obama administration’s landmark nuclear deal with Iran*. To them, Yemen is a proxy war, and the United States must side with the Gulf—never mind the absence of direct evidence of wide-scale Iranian meddling in the Houthi rebellion. “Blocking this sale of tanks will be interpreted by our Gulf partners, not just Saudi Arabia, as another sign that the United States of America is abandoning our commitment in the region and is an unreliable security partner,” Arizona Senator John McCain said, depicting the very dynamic Obama appeared to warn against the day before. “That’s what this vote is all about.”" Go to: http://www.theatlantic.com/international/archive/2016/09/yemen-saudi-arabia-obama-riyadh/501365/ For full article

*Italics mine, quote: "I would have thought a Marxist would be aware of the nuclear “shilly-shallying” betwen the U.S and Israel AND Israel’s determined strategy to; “throw its toys out of the pram” whenever it is not getting its own way (re: Iran Deal)!" From "Continuing discussion and comment on nature of "Yemen Bomb"" Go to: https://gkhales.blogspot.co.uk/2015/07/continuing-discussion-and-comment-on.html 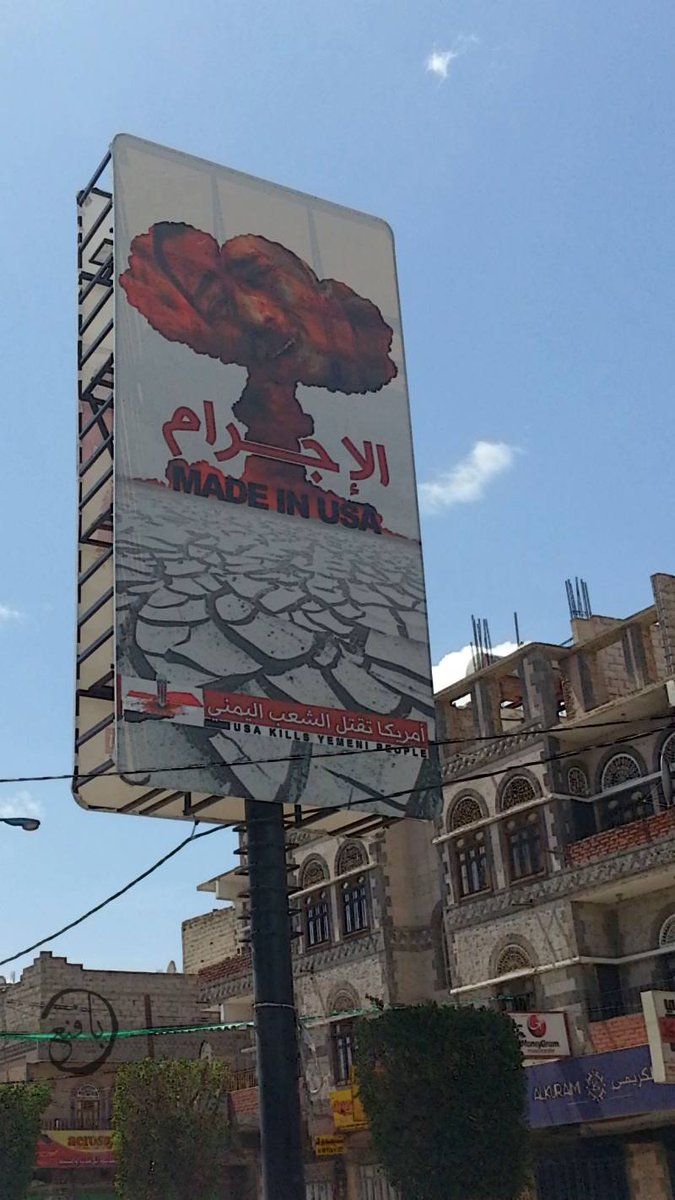 Some seem to have no doubt whatsoever what's been happening or who is to blame, the image above was posted to me from this Twitter Account today https://twitter.com/BaFana3 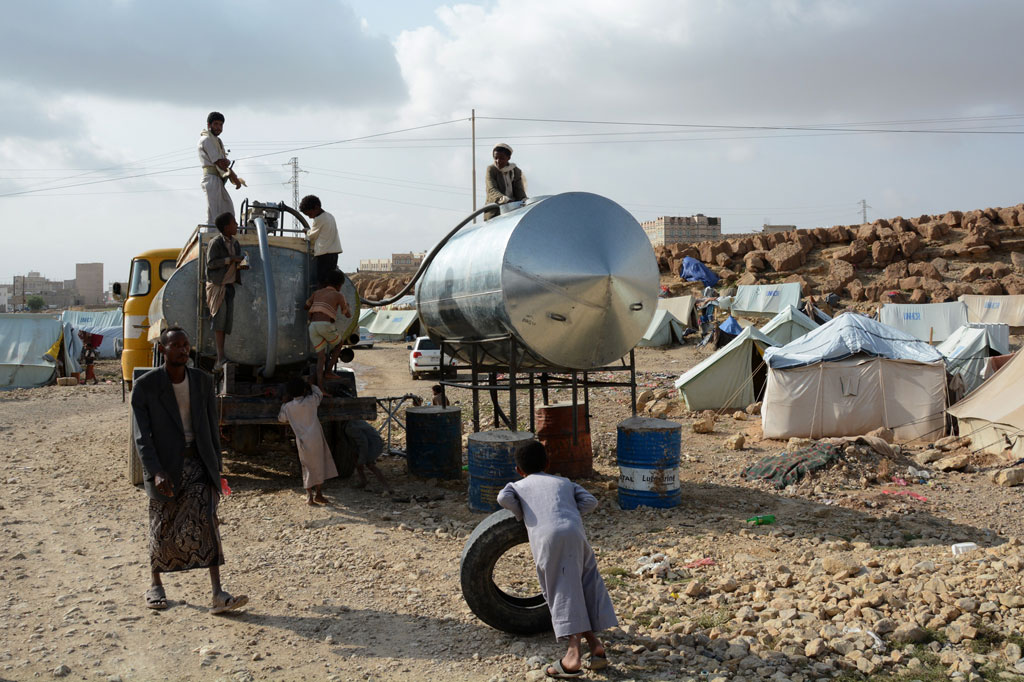 Quote; "Britain is at risk of being prosecuted for war crimes because of growing evidence that missiles sold to Saudi Arabia have been used against civilian targets in Yemen’s brutal civil war, Foreign Office lawyers and diplomats have warned.

Advisers to Philip Hammond, the Foreign Secretary, have stepped up legal warnings that the sale of specialist missiles to the Saudis, deployed throughout nine months of almost daily bombing raids in west Yemen against Houthi rebels, may breach international humanitarian law." Go to: http://www.independent.co.uk/news/uk/politics/uk-could-be-prosecuted-for-war-crimes-over-missiles-sold-to-saudi-arabia-that-were-used-to-kill-a6752166.html


Arafel Comment: As we know the various aid organisations and international bodies have been expressing concern over lack of access to and basic provision for the civilian population caught in the conflict since its inception and with increasing volume/desperation recently but it seems that it is acceptable that the very poorest should suffer as long as it is out-of-sight-and-out-of-mind! We would however be out of our minds ourselves to ignore the very obvious suggestion that the hubris of those who would have themselves "enlightened" in our society has finally resulted in the very ignition we plebeians have always so feared. 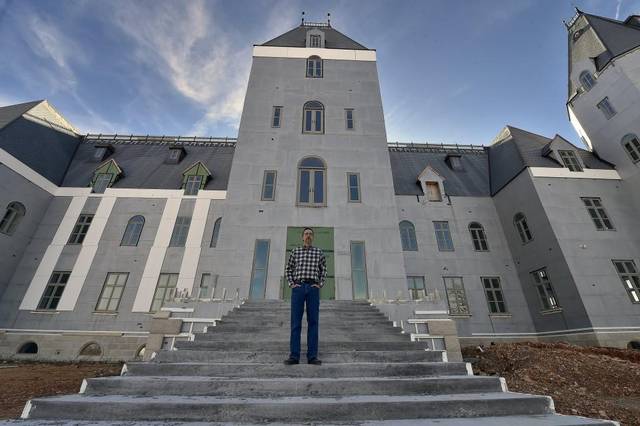