"Is this Really Possible? How Much do we Know About Israel's Nuclear Arsenal?" Re: #NuclearStrikeYemen

Quote: "Published on 29 May 2015
Its a 2 stage dual warhead ! Bunker Buster Weapon ! A nuclear bunker buster, also known as an Deep Earth-Penetrating Weapon (EPW) First blast is the first stage blasting the surface layer and second blast (a few second later is the Main Charge detonating deep under the ground." Go to: https://www.youtube.com/watch?v=Vu8GDJzyKx4
A number of the accounts showing such footage have been closed, there are however others available (see vid. below)!

Quote: "It was claimed that warplanes from a Saudi-led 'coalition' pounded a weapons depot on the edge of Yemen’s capital Sanaa on May 11, 2015 (conveniently one day before a humanitarian cease-fire) when low and behold, the massive blast is claimed by Yemen to be an explosion of another kind.

Notice the strange blue and greenish bomb blast color, before it envelops and kills the person who is taking this video from an estimated 1/2 mile to 2 miles away. A normal bomb would not look like this, or do anything like this..


Bungalow Phil May 28, 2015 "Blast levels hillside and destroys videographer (and all that was in view I assume) from about 2km away. What is shown appears to be a highly charged detonation. The blue crackling about the chaotic scene are charged particles similar to plasma. No other way to define this, IMO. The blue character of the initial blast at 1.21 is definitely not conventional. Note the duration of the destruction as it seems to just keep going and going for a full 30 seconds until the scene is interrupted. And let me remind everyone those are not stick structures but block and concrete, probably reinforced. The distance may even be further but my guess is 2km maybe 3.
At about 1.32 there's one individual and then another appears to be lying down. Only one frame each which I haven't been able to isolate. Somebody with better skills could and should post it. Much more developing on the Yemen nuke story @ stolen pits at Veteranstoday. Have a look.
https://www.youtube.com/watch?v=ZfOjy-ij4S0 " Go to: http://agreenroad.blogspot.co.uk/2015/05/former-iaea-inspector-and-nuclear.html 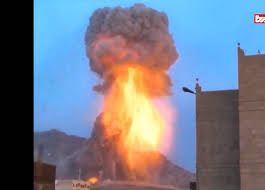 He also says some interesting things about the Bush family's involvement in nuclear proliferation (this murky stuff being precisely the reason I have not written -and am not exactly planning to write-, Pt.2 of; "Saddam, The Bomb and the Almagordo Thefts -an alternative view of "Desert Storm"-" Pt.1") Go to: http://gkhales.blogspot.co.uk/2013/09/desert-storm-saddam-bomb-and-almagordo.html 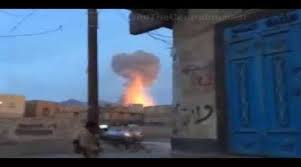 The report below is unconfirmed. The evidence is scanty. The analysis of this event requires further examination. There is no proof that it was an Israeli IDF undertaking (M. Ch, GR Editor)

Analysis by Jeff Smith who is a nuclear physicist and former IAEA inspector:

A video received from Yemen, believed to be taken May 20, 2015, of an explosion, when analyzed by nuclear weapons experts is, by very high probability, a neutron bomb that could only have been an Israeli attack.

A. Its not a conventional 2k lb bomb. It’s much bigger.

Lightning effect and duration of the fire ball being suspended in mid air and the very large mushroom cloud is the main give away, that is because it is being hit by neutrons from the nuclear fireball blast. It overloads the ccd’s electronic circuit producing white flashes. If the radiation is too high it will burn out the chip. They had big problems with this in Japan with the Fukushima robots cameras failing due to very high radiation counts.

D. Delivery is most likely by an IDF F-16 with a Saudi paint job on the plane. They are not even hiding their use anymore, they just don’t publicly admit it and the IAEA does nothing or says nothing. That is the true war crime. The UN just ignores it unless the US, France or GB complain…

Russia and China say nothing. Go to: http://www.globalresearch.ca/possible-tactical-nuclear-strike-neutron-bomb-in-yemen/5452876

Pravda thought the story newsworthy, quote;
"Saudis have begun to wipe Yemen off the map. Tactical strikes have hit the city."

Israel is reported to be the one to deploy such neutron bombs.

Any doubts about the nuclear attack on Yemen attributed to Israel, as evidenced in two Israeli F16s shot down and forensically identified, are now gone.

Forbidden strikes have brought about a storm of worldwide protest.

Obama has recently promised to provide every assistance including US military force to any "external threat" the rich Arab states of the Gulf may face.

At the same time: "Democracy Now" and "Haaretz" report, quote; "
Israel Tested Nuclear-Laced "Dirty Bombs" in Desert
Meanwhile a report by the Israeli newspaper Haaretz reveals Israel recently detonated a series of so-called "dirty bombs" laced with nuclear material, purportedly to test the potential impact of a radioactive attack. The so-called Green Field project involved 20 detonations, most of them in the desert, over four years, ending in 2014." Go to: http://www.democracynow.org/2015/6/9/headlines#696 (isn't that illegal too?)

..and today (10/06/2015),  from Russia Today, quote; "Israel has carried out a series of test detonations to measure the effects of a “dirty” radiological bomb if it were used by “hostile forces,” according to a report in the Israeli newspaper Haaretz.
Twenty detonation tests were performed involving between 250 grams and 25 kilograms of explosives together with the common radioactive substance known as 99mTc, according to the report.
Most of the dirty bomb detonations were carried out in the southern Negev desert in conjunction with a four-year “Green field” project at the Dimona Nuclear Research Center, the report says. 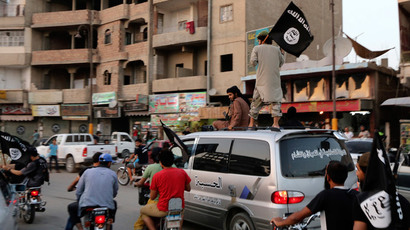 “The research concluded that high-level radiation was measured at the center of the explosions, with a low level of dispersal of radiation by particles carried by the wind,” the report said. “Sources at the reactor said this doesn’t pose a substantial danger beyond the psychological effect.”
The so-called “dirty bomb” combines conventional explosives with, radioactive materials and is not considered to be a nuclear weapon or a weapon of mass destruction.
The daily newspaper added that additional six indoor tests called the “Red House” were conducted to measure the impact of radioactive substance left in a crowded public space. During the experiment a material mixed with water was left in the ventilation system of a two-story building on a Home Front Command base, simulating a shopping mall, according to the report. This test proved to be not effective from the “terrorists’ perspective,” it said.
The four-year experiments were launched in 2010 and the results presented at scientific gatherings and on nuclear science databases. The researchers said that the tests were conducted for defensive purposes.
Terrorists have threatened to use dirty bombs, but those groups have never actually made such an attack. After the 9/11 terrorists attacks and subsequent threats made by Al-Qaeda to use a dirty bomb, Israel has been conducting civil defense drills – its first simulated response to a radioactive dispersal device attack. The Health Ministry issued procedures on how to deal with such an event in 2006.
In December 2014, Islamic State militants – an Al-Qaeda offshoot – claimed to have developed a crude nuclear weapon using materials seized from Mosul University, Iraq, according to UK media reports. These claims have not been verified, however" Go to: http://rt.com/news/265831-israel-tests-dirty-bomb/

Also today (10/06/15), from "Middle Eastern Eye" reporting on the same story, quote: "
The tests involved 20 detonations, comprising 250 grams to 25 kilograms of explosives, mixed with a radioactive material called 99mTc which is used for medical imaging. Tiny drones were used to measure radiation, while sensors measured the impact of each blast.
The tests, Haaretz said, stemmed from public concern over radiological terrorism after the 11 September attacks in the United States in 2001, in addition to the threat that al-Qaeda members have made to attack the US again.
Israel has not experienced a radioactive attack before, but the government has taken all precautions and made arrangements in case such a situation occurs. In the case of such an event, the Israeli army’s Home Front Command website includes an explanation of how to react.
The Negev desert not only houses the Dimona nuclear reactor, but is also home to 200,000 Palestinian Bedouins. Some 90,000 of them live in 46 villages, of which 35 are not recognised by Israel and thus do not receive any basic services such as water or electricity.
There are fears from within the Bedouin community that Israel will proceed with a now shelved plan, known as the Prawer Plan, to forcibly displace those in unrecognised villages - around 70,000 - into government-built townships.
It has long been speculated that besides planning to build Jewish settlements in place of these Bedouin villages, the government planned to clear some of these villages in order to use them as military training and exercise bases away from urban areas.
Israel has long avoided mention of its nuclear plant activity, even after its nuclear programme was leaked to the media in 1986 by Mordechai Vanunu, a technician who worked at the reactor. Moreover, reports that Israel has succeeded in building an entire underground nuclear arsenal - estimated to be made up of 80 warheads - has been met with relative silence from the international community." Go to: http://www.middleeasteye.net/news/israel-tests-dirty-bombs-negev-desert-958819943 For full article. 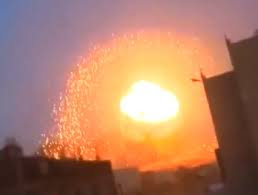