Oh I won't be the only one but that's pretty much the point, Richard Attenborough was "one of those people"! From a privileged background? To some extent but then so are our current administration but I don't think they would have made "Gandhi" do you (or even been capable of doing so despite combining what is left of their talents)? People like Attenborough leave a hole when they leave (knowing of-course that "nature abhors a vacuum"), that directs our attention to the issues which concerned them when they were alive, this is a legacy and Attenborough's is considerable; "Gandhi" and "Cry Freedom" are seminal works and reveal the true heart of the man, but of-course it is not merely the work itself which inspires but also the way by which it was accomplished, as a director he was determined and indomitable as an actor he was both powerful and subtle. One wonders what his parents were like (I hear he has a brother who has also been somewhat succesful in his field), one cannot put a price on good parenting and schooling (& as far as the latter is concerned why do we?), and their example must surely be (in many ways), as important as that of their off-spring. Nobody can claim to be perfect (as I am sure "Dicky" would be the first to admit), but the fundamentalists and dogmatists will always try to reduce to the absurd the achievements of those who don't live up to their (lowest of), standards. Tolerance and compassion do not (as Gandhi himself made very clear), reside solely in one people, one creed or one politics and if this realisation is at the core of his legacy (& that of his brother's), then the Attenboroughs have achieved something truly remarkable for it shall endure, I defy the monetarists and communists to achieve the same. 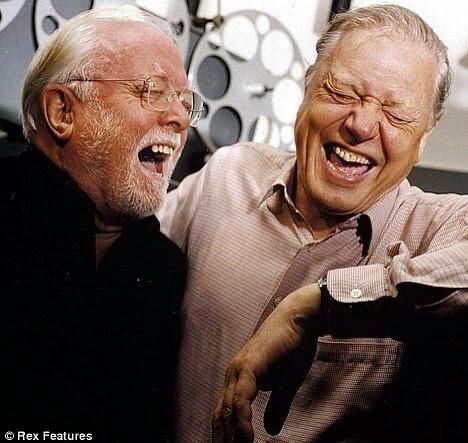 Quote: "His father, who was principal of the local university college, instilled in his children the belief that not one minute of the day should be wasted.
It was a philosophy that Attenborough carried into his professional life astonishing colleagues with his tireless 20-hours-a-day energy.
A dedicated socialist, he was introduced to rebellious politics by his mother, who joined protest marches in the 1930s against Spain's General Franco and took in Basque refugees from the Spanish Civil War.
His parents also helped to co-ordinate the evacuation of Jewish children from Europe." Go to: http://www.dailymail.co.uk/news/article-2733312/BREAKING-NEWS-Actor-film-director-Richard-Attenborough-dies-aged-90.html

and from the Media Lens Message Board..

Then a scholarship to RADA. His paternal grandad was a working class baker, his mother's side were the educationalists.

As usual the obits have undervalued his acting skills, as displayed in some cracking British films. I would suggest that the spivs he often played were closer to the spirit of the current shower in power and illustrate where their particular 'talents' lie.

It is a pity that the death of the British film industry meant that he never got to turn Trevor Griffith's Tom Paine script into a film" ...

"A man to be sorely missed.

He gave two outstanding film performances of course -- Pinkie in Brighton Rock (I think Greene said he he came nearest to portraying one of his characters than any other actor) and Christie in 10 Rillington Place. That slightly effeminate lisp he used was chilling and even in a brief clip they showed last night it sent shivers down the spine.

I've probably see that film at least 10 times and its powerful affect is never diminished, partly I suspect because it was filmed in the house itself, which adds a very macabre twist to it.