Part 1 of an examination of the influence of The #Illuminati and #Freemasonry in #America on the day of the 17th ("or was it the 18th?"), school shooting in the #US 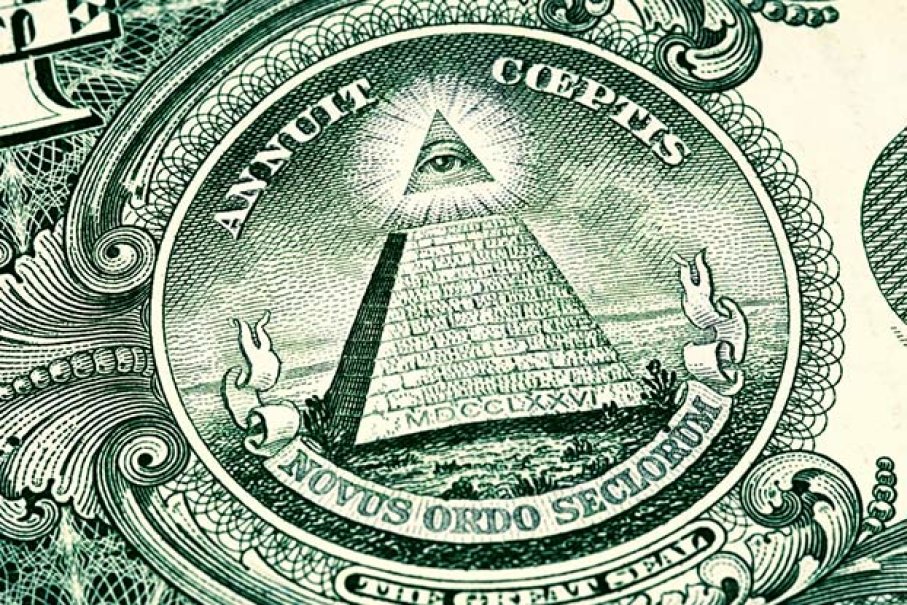 "Illuminati are running the world: not mad, the idea of questioning hidden power elites is sane
Guardian Comment is Free LINK https://www.theguardian.com/commentisfree/2018/feb/14/illuminati-running-world-not-mad-idea-questioning-hidden-power-elites-sane Some below-the-line comments:
"Anyone who doesn't believe that the very rich and powerful are conspiring against the majority of us by buying influence with governments in order to keep corporate and personal taxes low, and regulation weak, is a fool."

"Guardian, why the need to link the loaded, nutty "illuminati" word into this mix?"

"Given that we know for certain that the world's richest people meet (not in secret, but in plain sight) with politicians once a year at Davos, it really isn't as big a stretch to conceive of interconnected, mutually-benefiting elites. Why obscure these facts by mockingly referring to "illuminants". What we can also be confident about is that inter-connected, moneyed monopolies don't give a stuff for the daily well-being of people or the planet."" Posted by Margo to The Lifeboat News ("TLN"), message board.


"It isn't "nutty" M ..they are! You cannot discount the historical validity of their existence or the predilection of powerful men to form themselves into "mystical" elites...Don't throw the baby out..they ain't that bright!" Posted by Gerard ("Arafel" editor/blog producer).

"It used to be considered relatively uncontroversial to point out the power hierarchy. Dunno exactly when it became controversial. Probably mid to late 90s, something like that. I mean do these people think we live in some sort of meritocracy? It's hard to see where this writer is coming from. His seems to be a view from nowhere. Nowhere where experience is to be had, that's for sure.
And he's a philosopher.
Didn't he read Plato?
It's all there in The Republic and The Laws." Posted by Paddy.

Quote; "Freemasonry's real impact on America is richer and more significant than anything that entertainment or speculation would hold. As a radical thought movement that emerged from the Reformation, Freemasonry was the first widespread and well-connected organization to espouse religious toleration and liberty—principles that the fraternity helped spread through the American colonies.

It may seem anomalous for such liberal principles to arise from a clandestine brotherhood; but skullduggery was never Masonry's primary aim. In an age of religious conflict in 17th century Europe—when an individual caught running afoul of church strictures could suffer persecution or worse—Freemasons clung to secrecy less out of esoteric drama than political expedience. Freemasons believed in a search for religious truth as it existed in all civilizations, including those of a pre-Christian past, and they drew upon ancient and occult symbols, from pentagrams to luminescent eyeballs, as codes for ethical development and civic progress. Reactions from church authorities ranged from suspicion to hostility. European Masons had good reason to be discrete.

In a young America, Masonic ideals fully took flight—sometimes in unexpected ways. In Boston in 1775, Freemasonic officials who were part of a British garrison granted local freemen of color the right to affiliate as Masons under the banner of African Lodge No. 1. The African Lodge later became known as Prince Hall Masonry, so named for the order's founder, Prince Hall, a freed slave. Hall became the first African-American named a Grand Master. Despite the African Lodge's segregated status, Prince Hall Masonry was a bastion of abolitionism. Its leader affixed his name to some of the republic's earliest anti-slavery petitions in 1777 and 1778. As such, African Lodge No. 1 represented the first black-led abolitionist movement in American history.

Whatever its airs of mystery and images of skulls, pyramids, and all-seeing eyes, Freemasonry's most radical, even dangerous, idea was the encouragement of different faiths within a single nation. Early in his first term, Washington communicated these ideals in a letter to the congregation of a Rhode Island synagogue: "It is now no more that toleration is spoken of as if it was the indulgence of one class of people that another enjoyed the exercise of their inherent natural rights. For happily, the government of the United States, which gives to bigotry no sanction, to persecution no assistance, requires only that they who live under its protection should demean themselves as good citizens..." In other words, in this new nation minority religions were not just guests at the table, but full householders.

Washington and other early American Freemasons rejected a European past in which one overarching authority regulated the exchange of ideas. And this outlook is found in one of the greatest symbols associated with Freemasonry: The eye-and-pyramid of the Great Seal of the United States, familiar today from the back of the dollar bill. The Great Seal's design began on July 4th, 1776, on an order from the Continental Congress and under the direction of Benjamin Franklin (another Freemason), Thomas Jefferson, and John Adams. The Latin maxim that surrounds the unfinished pyramid—Annuit Coeptis Novus Ordo Seclorum—can be roughly, if poetically, translated as: "God Smiles on Our New Order of the Ages." It is Masonic philosophy to the core: The pyramid, or worldly achievement, is incomplete without the blessing of Providence. And this polity of man and God, as Masonry saw it, required a break with the religious order of the Old World and a renewed search for universal truth. In its symbols and ideas, Masonry conveyed a sense that something new was being born in America: that the individual's conscience was beyond denominational affiliation or government command*." Go to: https://www.usnews.com/opinion/articles/2009/09/14/masons-and-the-making-of-america
for full article.

It's been said that Washington truly wanted to rid the American lodges of "Illuminati", Quote; "It was some time since that a book fell into my hands entitled “Proofs of a Conspiracy &c. by John Robison,” which gives a full account of a Society of Freemasons, that distinguishes itself by the name of "Illuminati,” whose plan is to overturn all government and all religion, even natural; and who endeavour to eradicate every Idea of a Supreme Being, and distinguish man from beast by his shape only. A thought suggested itself to me, that some of the Lodges in the United States might have caught the infection, and might cooperate with the Illuminati or the Jacobine Club in France. Fauchet is mentioned by Robison as a zealous member: and who can doubt of Genet and Adet? Have not these their confidants in this country? They use the same expressions and are generally men of no religion. Upon serious reflection I was led to think that it might be within your power to prevent the horrid plan from corrupting the brethren of the English Lodge over which you preside.

I send you the “Proof of a Conspiracy &c.” which, I doubt not, will give you satisfaction and afford you matter for a train of ideas, that may operate to our national felicity. If, however, you have already perused the book, it will not, I trust, be disagreeable to you that I have presumed to address you with this letter and the book accompanying it. It proceeded from the sincerity of my heart and my ardent wishes for the common good.

May the Supreme Ruler of all Things continue you long with us in these perilous times: may he endow you with strength and wisdom to save our country in the threatening storms and gathering clouds of factions and commotions! and after you have completed his work on this terrene spot, may He bring you to the full possession of the glorious liberty of the children of god, is the hearty and most sincere wish of your excellency’s very humble and devoted servant

Where the "Illuminati" came from, quote; "Born in 1748 in Ingolstadt, a city in the Electorate of Bavaria (now part of modern-day Germany), Weishaupt was a descendant of Jewish converts to Christianity. Orphaned at a young age, his scholarly uncle took care of his education, and enrolled him in a Jesuit school. After completing his studies, Weishaupt became a professor of natural and canon law at the University of Ingolstadt, married, and started a family. On the surface, it was a conventional enough career—until 1784 when the Bavarian state learned of his incendiary ideas.

A closer look at his upbringing, however, reveals that Weishaupt always had a restless mind. As a boy he was an avid reader, consuming books by the latest French Enlightenment philosophers in his uncle’s library. Bavaria at that time was deeply conservative and Catholic. Weishaupt was not the only one who believed that the monarchy and the church were repressing freedom of thought.

Convinced that religious ideas were no longer an adequate belief system to govern modern societies, he decided to find another form of “illumination,” a set of ideas and practices that could be applied to radically change the way European states were run.

Freemasonry was steadily expanding throughout Europe in this period, offering attractive alternatives to freethinkers. Weishaupt initially thought of joining a lodge. Disillusioned with many of the Freemasons’ ideas, however, he became absorbed in books dealing with such esoteric themes as the Mysteries of the Seven Sages of Memphis and the Kabbala, and decided to found a new secret society of his own." Go to: https://www.nationalgeographic.com/archaeology-and-history/magazine/2016/07-08/profile-adam-weishaupt-illuminati-secret-society/
for full article.

Ideas (if they do indeed contain any rationale), persist far longer than their progenitors, the Illuminati cannot (and must not), simply be dismissed. There is little doubt in my mind that the conflict between The Freemasons and The Illuminati still goes on especially in America. These are powerful and influential people, people who must fill their lives with something and rely on a binding other than the mere brute struggle for capital that would otherwise have them tearing each other's throats out on a daily basis, such is; "bad for business Luigi" there has to be a "code"." Posted by Gerard.