"The Roll of the Dead: Deaths at the Hands of the British State" #Austerity #VoxPolitical #SamuelMiller

With considerable thanks to Sam Miller @Hephaestus7
for doing this vital work (reproduced in full -and subject to update -unfortunately and to our great shame-), ...

Quote: "I am temporarily holding and updating Black Triangle’s list of people who have been affected by this governments policy of cuts and sanctions:
Please read more about their ethos here: http://blacktrianglecampaign.org/about/
14 Sep 2015 — The Department of Work and Pensions (DWP) published guidance to Jobcentre officials who decide whether claimants should have their payments stopped.
The guidance says: “It would be usual for a normal healthy adult to suffer some deterioration in their health if they were without:
1. essential items such as food, clothing, heating and accommodation, or
2. sufficient money to buy essential items for a period of two weeks.”
“The Decision Maker must decided if the health of the person with the medical condition would decline more than a normal healthy adult.”
I have compiled a list of the deceased and those who have been adversely affected using the information from these sites  http://twishort.com/0x9gc http://blacktrianglecampaign.org/…/uk-welfare-reform…/ https://welfaretales.wordpress.com/…/death-after-fit…/ https://welfaretales.wordpress.com/…/list-of-welfare…/.
I fully agree with the assertion of Welfare Tales that these are the deaths that we know of because a friend, relative or the coroner has commented.
Sadly to say there are probably many more and as more of these horrific cases come to light. They will never be forgotten, by their families, friends and those who they touched in their day to day lives.
If you are feeling suicidal, please speak to your doctor and / or someone close to you. Or please call The Samaritans on 08457 90 90 90.
In memorial R.I.P

Deteriorating health while waiting for a decision
Thomas O’Donnell – He suffered from epilepsy, depression, arthritis and memory loss – yet was made to wait eight months for his Personal Independence Payment (PIP).
http://www.mirror.co.uk/news/uk-news/disabled-man-left-malnutrition-after-3795893
Found Fit for work:

Added July 2016
Carly Canavan, 21, A severely disabled young woman with a mental age of a four-year-old  ordered to prove she cannot work.
http://www.mirror.co.uk/news/uk-news/disabled-girl-mental-age-four-6630369#ICID=sharebar_twitter
Added June 2016
Edward West. A Disabled Darlington man has been considered unable to work for the entirety of his adult life. Mr West lives in sheltered accommodation, has significant learning difficulties and needs the support of a carer several times a week.
http://www.thenorthernecho.co.uk/news/14552190.__39_The_system_should_be_scrapped__39___Disabled_man_criticises_DWP/
Added May 2016
Kenny Bailey ,Father of two, had his benefits slashed despite suffering with severe memory problems and being paralysed down one side after suffering a massive stroke
http://www.mirror.co.uk/news/uk-news/partially-paralysed-man-part-head-7955792
and then almost immediately had the decision overturned – It beggars belief! http://www.mirror.co.uk/news/uk-news/man-part-head-missing-who-8037089
David Waite, 60 years old, suffers from a string of health problems including brain, damage neck pain, diabetes and depression.
The Peoples review of the WCA published this report. There is a long depressing list of other people whose health has deteriorated after being “found fit for work” http://www.centreforwelfarereform.org/library/type/pdfs/the-peoples-review-of-the-wca.html published 20th Dc 2014
" Go to:  https://mzolobajluk.wordpress.com/2015/09/14/the-increasing-death-toll-due-to-the-loss-of-benefits/

Quote; "This group is established to galvanise opposition to the current vicious attack on the fundamental human rights of disabled people by Government using “Work Capability Assessments” to re-classify sick and disabled individuals as “fit for work”. This site is dedicated to the memory of Paul Reekie (Born January 23, 1962; Died June 2010) : Let Perpetual Light Shine Upon Him; May He Rest in Peace."....

..."The Nazis forced people with mental and other disabilities to wear black triangles in the extermination camps during the Holocaust. The generic classification they used was “Arbeitsscheu” – literally “Workshy”. This term is also the one most favoured in our right-wing tabloid press to described incapacity and disability benefit claimants today.
This group of people could also include the homeless, alcoholics, prostitutes, draft dodgers, pacifists and travellers (Roma).
It is salutary to use the black triangle as the symbol of the UK Disabled People’s Protest Movement because British society is at present seeing an increasing number of violent and deadly attacks on people of disability in the community, and the tormenting of disabled people leading to tragic suicides and an official policy on the part of the State to infer that disabled people are just “workshy” and must be reclassified as “fit for work.”
It has become socially acceptable to ridicule, demonise and denigrate the disabled, both in public and in the mass media." Go to: http://blacktrianglecampaign.org/about/

Arafel: Recently our friend Jose (Bitterne Triangle Southampton), was on the phone to one of us saying how he had been complaining to The Job Centre concerning the amount of stress that the "Job-Search" commitments (forced on him when he lost his Disability Living Allowance and failed in his application for so called "Personal Independence Payment"), were causing him (he had a heart condition), when he stopped abruptly mid-conversation, my other friend (who is clearly still in considerable shock), went to his house only to find him lying dead on the floor having suffered a fatal heart attack.
The Spaniard was a talented artist of the modernist school and a "known figure" around Portswood and Bitterne Southampton, where he had lived for years, walking his little dog (his only house companion), which has now lost its companion ("fascisti "old comrade" fascisti!"), Rest in Peace my friend. 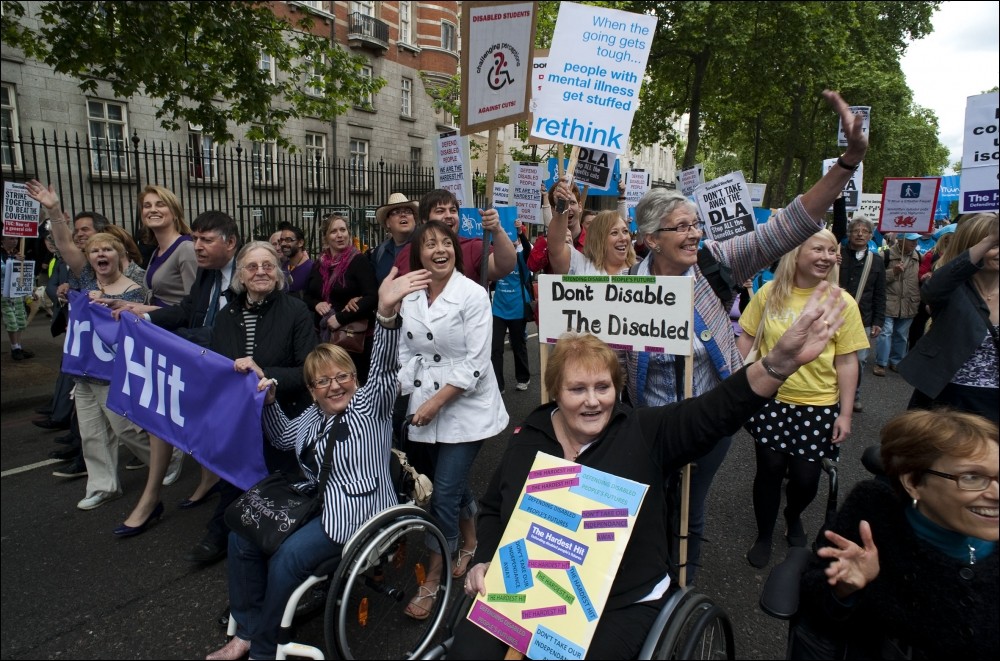 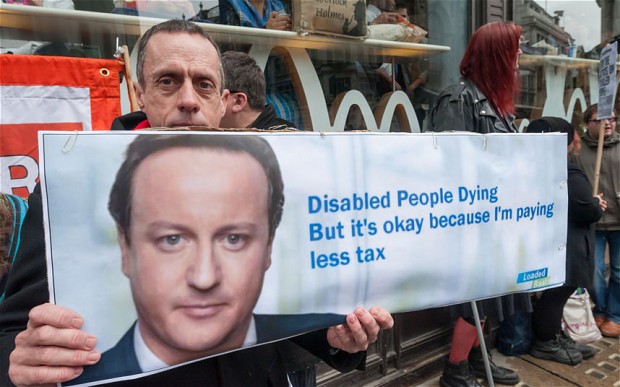