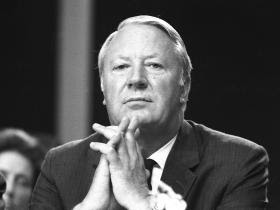 Quote; "Police said none of the allegations, claiming Sir Edward assaulted victims as young as 10, took place while he was Prime Minister.
“No inference of guilt should be drawn by the decision to interview under caution,” a spokesperson added.
“The account from Sir Edward Heath would have been as important as other evidence gathered as part of the wider investigation.”
They include the alleged rape of an 11-year-old boy, indecent assault of a 10-year-old boy and the indecent assault of a 15-year-old boy during three “paid sexual encounters”, and are said to have occurred between 1961 and 1992 in London, Kent, Sussex, the Channel Islands and Wiltshire.
Chief Constable Mike Veale said there were “compelling and obvious reasons to investigate” the allegations."..
.. "It received 42 disclosures relating to 40 people over 14 different police force areas in the UK.
Of those, 19 were found not to meet the threshold for interview, three complaints were withdrawn, 10 were reported by a third party and another three allegations were made anonymously.
The report revealed that there was “reason to suspect” two people may have intentionally misled the police by claiming that they were abused by Sir Edward.
“In the case of one of these disclosures, a live criminal investigation remains ongoing,” it states.
Another person was formally cautioned for wasting police after admitting that they had misled the investigation falsely claiming to be three different people in three separate claims.
Wiltshire Police said its conduct was scrutinised by an independent panel and a “value for money” review by Her Majesty’s Inspector of Constabulary, which found no wrongdoing.
Operation Hydrant carried out two reviews on Operation Conifer, which concluded that the probe was proportionate and being carried out in line with national guidance.
The report marks the official end of the probe, which was launched in 2015 after Sir Edward was named as a suspect in an investigation into historical child sex abuse.
Its findings will be passed to the wide-ranging Independent Inquiry into Child Sexual Abuse, which is being chaired by Professor Alexis Jay." Go to: http://www.independent.co.uk/news/uk/crime/sir-edward-heath-report-child-sex-abuse-allegations-investigation-inquiry-grounds-interview-caution-a7984256.html For full article and video.

Quote; "The independent inquiry into Child Sex Abuse (IICSA) was forced to issue an apology following the loss of vital evidence in the case that was deleted from their servers.


The data, which would have held testimonies and strong evidence for the inquiry, was said to have been lost due to a 'technical malfunction'.
Despite the technical glitch, the agency said there was no security breach in their systems and ensured that privacy of the victims is not at risk.
Freethought project reports London, UK — The Independent Inquiry Into Child Sex Abuse (IICSA) apologized this week after vital testimony from victims of child sexual abuse was “instantly and permanently deleted” from their servers."...
...."“Due to a change in our website address to http://www.iicsa.org.uk on 14 September, any information submitted to the Inquiry between 14 September and 2 October through the online form on the "Share Your Experience" page of our website, was instantly and permanently deleted before it reached our engagement team. We are very sorry for any inconvenience or distress this will cause and would like to reassure you that no information was put at risk of disclosure or unauthorised access*." Go to: http://www.neon-nettle.com/features/974-uk-government-deletes-entire-database-of-elite-pedophile-ring-evidence- For full article.
*Italics mine. Isn't this the one scenario in these cases that one would be expected to most assiduously avoid?!
Barbara Castle drew up dossier on VIP paedophiles: File seized by Special Branch 'heavy mob'
Quote; "Lady Castle put together 30 pages of information about alleged attempts by the Paedophile Information Exchange (PIE) to infiltrate government while seeking funding and trying to persuade MPs to legalise sex with children.
As well as key members of both the Commons and Lords, she found that about 30 prominent businessmen, public school teachers, scoutmasters and police officers had links to PIE.
Yesterday Mr Hale, 61, said: ‘Barbara was horrified at the rapid extent of PIE’s involvement with key people and her file included details of about 16 household-name MPs.’
He said Lady Castle – who at the time was Euro MP Barbara Castle – passed him the dossier and asked if he would write a story based on it." Go to: http://www.dailymail.co.uk/news/article-2693635/Now-revealed-Barbara-Castle-drew-dossier-VIP-paedophiles-File-seized-Special-Branch-heavy-mob.html For full article.
Also see; http://www.arafel.co.uk/2017/01/heath-investigation-continues-epstein.html, http://www.arafel.co.uk/2016/11/those-nice-people-at-boiling-frogs-add.html, http://www.arafel.co.uk/2016/11/yew-haw-poison-in-flesh-childabuse.html, http://www.arafel.co.uk/2016/11/absolute-power.html & http://www.arafel.co.uk/2016/10/the-horrible-cant-possibly-be-true.html
Posted by Gerard at 11:23