Quote; "A BBC interview, of which only 20 seconds out of more than 10 minutes were broadcast, has come to light. And it has exposed the UN’s most scathing attack on the Conservative government to date.

Published by the UN, it reveals the organisation thinks that austerity is “life threatening” to many disabled people in the UK. And it sees the government’s actions potentially leading to “killings and euthanasia”, because it has helped create a society where a whole group of people are viewed as “parasites”. But it’s an interview the BBC completely dumbed down for its viewers.

In August, the UN Committee on the Rights of Persons with Disabilities (UNCRPD) met in Geneva, Switzerland. It was assessing if the UK government meets its obligations under the UN Convention on the Rights of Disabled People.
And it was publicly unequivocal in its opinion on how disabled people are treated by the Conservative government. Its Chair, Theresia Degener, said in a statement seen by The Canary:

Disabled people: ‘parasites’ who could be ‘killed’

In the BBC interview, one of the UN’s most scathing comments was about public attitudes towards disabled people. Degener said that the government and the media “have some responsibility” for society seeing disabled people as “parasites, living on social benefits… and [living on] the taxes of other people”. And she said these “very, very dangerous” attitudes could  “lead to violence… and if not, to killings and euthanasia”. And she urged the government to “stop” this:" Go to: https://www.thecanary.co/uk/2017/09/15/bbc-didnt-broadcast-uns-scathing-interview-ever-uk-government-full-audio/ For full article and audio of this interview.

4 out of 5 Default Under Universal Credit: Flassbeck Economics

Quote; "Since the conservatives came to power in 2010, one million jobs in the public sector have been lost (see here). The champions of austerity have more than doubled national debt. It is now the sixth-highest of any advanced economy. Today, 4.2 million disabled people live in poverty in the UK. As a UN committee wrote, government policies in the UK “have caused grave and systematic violations in the rights of disabled people” (see below). The number of homeless people in the UK has doubled since 2010 (see here, here and here for a report of the Department of Communities and Local Government). When the Tories returned to power in 2010, there were some 66 food banks in the UK. Today, there are more than 2.000 and they cannot keep up. The Universal Credit Scheme (“social welfare”) that the Tories have introduced leads to an avalanche of evictions (see here; today, 4 out of 5 people who have been transferred to this new scheme face eviction because they are unable to pay rent (see here and here))*. But no problem, the Tories are cooking up a scheme which may ultimately prevent up to four million people from voting in the next general election (see here). Last Saturday, Boris Johnson repeated his scandalous Brexit lie about the £350 million a week that the UK would invest in the NHS if the country would be out of the EU (see here for an excellent article on Theresa May, her government and all the Brexit lies). For the rest, it is all about the immigrants – May’s personal pathological obsession." Go to: http://www.flassbeck-economics.com/the-tories-are-using-the-brexit-to-turn-the-uk-into-a-right-wing-dictatorship/ For full article.

Millions of the UK’s poorest families driven into deeper poverty

Quote; "Commissioned by the LGA, “The Cumulative Impact of Welfare Reform: A national picture,” shows the impact of welfare reform across the whole of the UK. It assesses the devastating impact of welfare cuts, growing inflation and ever-steeper rent rises in the private sector.
The study examined over 40 local authorities, representing 9.1 million households, receiving either a Department for Work and Pensions benefit, Housing Benefit, or Tax Credits. The data was examined via a modelling tool, the Benefits and Budgeting Calculator, used to measure the impact of reforms that have taken place and those yet to come.
It finds that reductions in household income will hit poorest families hardest, with more than 84 percent of lone parents or couples with children set to lose up to £50 a week or more in income.
The government’s overall agenda, dressed up as welfare “reform,” is underpinned by slashing welfare spending and encouraging people to move from benefits into work. By 2015, after five years of austerity, the Conservative/Liberal Democrats coalition had slashed nearly £17 billion from the social security budget. Theresa May’s current Tory government is committed to a further £12 billion in welfare cuts by 2018. This equates to a £1,500 cut for 8 million households in the two years to 2018." Go to: http://truepublica.org.uk/united-kingdom/millions-uks-poorest-families-driven-deeper-poverty/ For full and extensive article.

Quote; "A mother committed suicide after asking mental health workers “What have I got to do? Top myself to get help for my son?”.
73-year-old Valerie Grant walked in front of a train on 23rd April after a string of benefits and support were taken from her severely autistic son James, 37.

In the months leading to Mrs Grant’s suicide, Mr Grant was devastated by the removal of his disability benefits.
He had his support system completely stripped away from him by the Department for Work and Pensions. The inquest heard:

Mrs Grant had a history of depression. On the 10th January, she scored 96% for the severity of her mental health state after telling her GP she was suffering suicidal thoughts.
Following this, she was given a routine appointment which she did not attend."..

"An inquest in Cannock concluded ‘she had taken her own life whilst suffering from depression.’
Coroner Andrew Haigh accepted that lack of support was the main issue. He said:


There were a number of agencies involved, but nobody took a lead. I do have concerns about the lack of support, but I don’t think there’s any one agency that I can write to to try to remedy this,

Mr Haigh has previously raised concerns about the possible link between benefits and suicides, calling it a “worthwhile issue to explore”.
In an emotional outburst at the hearing, Mrs Grant’s stepson, Stuart Grant, shouted:


It is just being swept under the carpet. One agency blames another agency and they can get away with it.

Sadly, Mrs Grant’s decision to end her life shortly after such dismal decisions by the DWP is not an isolated incident." Go to: http://evolvepolitics.com/mother-killed-get-help-son-disability-benefits-slashed/ For full article.

Quote; "A report from a UN committee has criticised the UK government for its treatment of disabled people, saying it needs to do much more to protect the rights of the disabled.
The UK is required to regularly report to the UN on how it is honouring the Convention on the Rights of People with Disabilities*.
Anastasia Tempest, who lives in York, has cerebral palsy and uses a wheelchair.
She told 5 live’s Tony Livesey: "Social care managers are not equipped, and lack skill, in knowing how to assess people with disabilities."
She said she was asked "quite ridiculous" questions in her assessment, including "who does your eyeshadow?" and "do you put your own earrings in?"
A government spokesman said: “We’re disappointed that this report does not accurately reflect the evidence we gave to the UN, and fails to recognise all the progress we’ve made to empower disabled people."
He said the UK spent a record £50bn a year to support disabled people and those with health conditions - the second highest amount in the G7.
The UK was committed to furthering rights for all disabled people, he said, adding that almost 600,000 had moved into work over four years." Go to: http://www.bbc.co.uk/news/av/uk-41117812/disability-assessors-lack-right-skills

*Bold italics mine...How many Brits know that this is the case? Is the process open to public submissions? 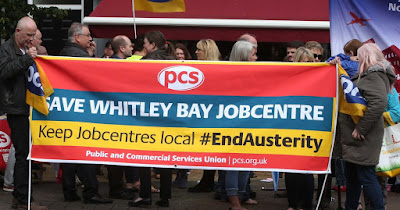